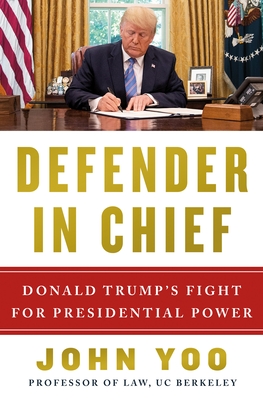 Ask any liberal—and many moderate conservatives—and they'll tell you that Donald Trump is a threat to the rule of law and the U.S. Constitution. Mainstream media outlets have reported fresh examples of alleged executive overreach or authoritarian White House decisions nearly every day of his presidency. In the 2020 primaries, the candidates have rushed to accuse Trump of destroying our democracy and jeopardizing our nation's very existence.

Yoo argues that this charge has things exactly backwards. Far from considering Trump an inherent threat to our nation's founding principles, Yoo convincingly argues that Washington, Jefferson, Madison and Hamilton would have seen Trump as returning to their vision of presidential power, even at his most controversial. It is instead liberal opponents who would overthrow existing constitutional understanding in order to unseat Trump, but in getting their man would inflict permanent damage on the office of the presidency, the most important office in our constitutional system and the world.

This provocative and engaging work is a compelling defense of an embattled president's ideas and actions.

“Donald Trump’s critics claim that he ignores the Constitution. But in a persuasive analysis, constitutional scholar John Yoo argues just the opposite. Trump may be an unlikely constitutionalist, but he certainly has done more than recent presidents in restoring executive powers as originally envisioned by the Founders from insidious encroachment by a progressive Congress and courts...An engaging, completely original, and superbly researched and argued analysis from one of America’s top legal minds that elevates the debate through Yoo’s mastery of history, jurisprudence, and dispassionate scholarship.”
––Victor Davis Hanson, the Hoover Institution, Stanford University, author of The Case for Trump

“Dreaded as a destructive demagogue, Donald Trump turns out to be a historically significant defender of the American constitutional order, of the Framers’ unique vision of executive vigor mindful of the law’s limits. No one could better elucidate this unlikely and welcome development than John Yoo, a Trump-skeptic and vitally important scholar of presidential power in our constitutional order. Defender in Chief is timely, brilliantly argued, and ultimately persuasive.”
––Andrew C. McCarthy, New York Times bestselling author and National Review contributing editor

“Why defend presidential power? Because, as counterintuitive as it might seem, energy in the executive actually advances individual freedom by curbing the threats of legislative and bureaucratic tyranny. The Founders understood this, and John Yoo’s Defender in Chief is an important reminder of the delicate balance of power our Constitution strikes.”
––Leonard Leo, co-chairman of the board of directors of the Federalist Society

JOHN YOO is one of America's best-known conservative constitutional scholars. He is currently the Emanuel S. Heller Professor of Law at the University of California, Berkeley, a visiting fellow at the Hoover Institution, Stanford University, and a visiting scholar at the American Enterprise Institute.
Previously, he served as an official in the U.S. Justice Department during the George W. Bush administration, general counsel of the U.S. Senate Judiciary Committee, and as a law clerk to U.S. Supreme Court Justice Clarence Thomas. He has written several books on American foreign policy and the power of the executive branch--including The Powers of War and Peace and Crisis and Command--and is a frequent guest on television programs.
Loading...
or
Not Currently Available for Direct Purchase