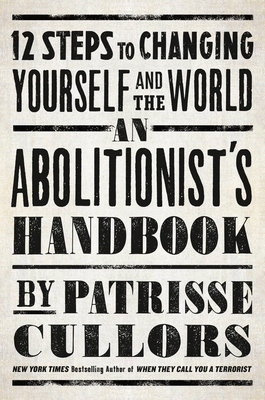 12 Steps to Changing Yourself and the World

In AN ABOLITIONIST’S HANDBOOK, Cullors charts a framework for how everyday activists can effectively fight for an abolitionist present and future.

Filled with relatable pedagogy on the history of abolition, a reimagining of what reparations look like for Black lives and real-life anecdotes from Cullors AN ABOLITIONIST’S HANDBOOK offers a bold, innovative, and humanistic approach to how to be a modern-day abolitionist. Cullors asks us to lead with love, fierce compassion, and precision.

In AN ABOLITIONIST’S HANDBOOK readers will learn how to:

- have courageous conversations
- move away from reaction and towards response
- take care of oneself while fighting for others
- turn inter-community conflict into a transformative action
- expand one’s imagination, think creatively, and find the courage to experiment
- make justice joyful
- practice active forgiveness
- make space for difficult feelings and honor mental health
- practice non-harm and cultivate compassion
- organize local and national governments to work towards abolition
- move away from cancel culture

AN ABOLITIONIST’S HANDBOOK is for those who are looking to reimagine a world where communities are treated with dignity, care and respect. It gives us permission to move away from cancel culture and into visioning change and healing.


Praise For An Abolitionist's Handbook: 12 Steps to Changing Yourself and the World…

"Her guidance on how to achieve personal and social transformation is enlightening. Readers will be inspired to take action." - Publishers Weekly

"Cullors offers a wide range of strategies for activists who share her view that you can’t always fix a broken system." - Kirkus

Praise for Patrisse and When They Call You a Terrorist:

“This book is a must-read for all of us.”—Michelle Alexander, New York Times bestselling author of The New Jim Crow

"This is a story of perseverance from a woman who found her voice in a world that often tried to shut her out. When They Call You a Terrorist is more than just a reflection on the American criminal justice system. It’s a call to action for readers to change a culture that allows for violence against people of color." – TIME Magazine, named one of the Best Memoirs of 2018 So Far

“This powerful book by Black Lives Matter co-founder Patrisse Khan-Cullors reminds us American racism is pervasive…the mission of Khan-Cullors and her fellow activists has never been more important – or more urgent.” The Guardian

"With great candor about her complex personal life, Khan-Cullors has created a memoir as compelling as a page-turning novel." - Booklist Starred Review

"This searing, timely look into a contemporary movement from one of its crucial leading voices belongs in all collections." - Library Journal Starred Review

An eye-opening and eloquent coming-of-age story from one of the leaders in the new generation of social activists.” —Publishers Weekly, starred review

"When They Call You a Terrorist deals with the incarceration and disenfranchisement of black men like her father, but it also explores facets of Cullors’ personal identity — black womanhood and sexuality,
as well as spirituality."—TIME

“It was when I read your book, ‘When They Call You A Terrorist’—when Trump was elected—that I realized that white supremacy is closer to the surface than I had ever realized, and I thought, ‘Man, I better understand this more.’” – Jane Fonda

“Patrisse Khan-Cullors is a leading visionary and activist, feminist, and civil rights leader who has literally changed the trajectory of politics and resistance in America.” —Eve Ensler, bestselling author

“This book tells why we all share the responsibility to move those three words from an aspiration into a new reality.” – American Book Award Winner Jeff Chang

"With grace and vulnerability, she recounts in When They Call You a Terrorist an upbringing plagued by interlocking oppressions and generational trauma, and illustrates the gut-wrenching power of her movement’s message: Black lives must be recognized as worthy in this world." - Teaching Tolerance Magazine

Patrisse Cullors is a New York Times bestselling author, educator, artist and abolitionist from Los Angeles, CA. Co-founder and former Executive Director of the Black Lives Matter Global Network Foundation, Patrisse has been on the frontlines of abolitionist organizing for 20 years. Since she began the Black Lives Matter movement in 2013, it has expanded into a global foundation supporting Black-led movements in the US, UK and Canada and has been nominated for the 2021 Nobel Peace Prize. TIME 100 also named Patrisse as one of the 100 most influential people in 2020. As an outspoken abolitionist and artist, Patrisse teamed up with Noé Olivas and Alexandre Dorriz to serve as a co-founder of the Crenshaw Dairy Mart, a reimagined art gallery and studio dedicated to shifting the trauma-induced conditions of poverty and economic injustice through the lens of Inglewood and its community. Patrisse is also the faculty director of Arizona’s Prescott College, a new Social and Environmental Arts Practice MFA program, which she developed nesting a curriculum focused on the intersection of art, social justice and community organizing that is first of its kind. In 2020, Patrisse signed an overall production deal with Warner Brothers, where she intends to continue to uplift Black stories, talent and creators that are transforming the world of art and culture. Her books include When They Call You a Terrorist and An Abolitionist's Handbook.
Loading...
or support indie stores by buying on