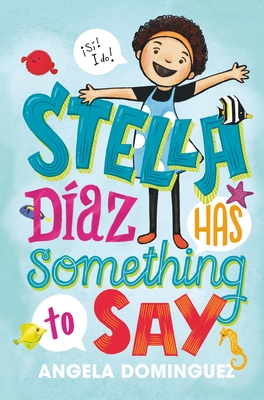 Stella Diaz Has Something to Say (Paperback)

In her first middle-grade novel, award-winning picture book author and illustrator Angela Dominguez tells a heartwarming story based on her own experiences growing up Mexican-American.

Stella Diaz loves marine animals, especially her betta fish, Pancho. But Stella Diaz is not a betta fish. Betta fish like to be alone, while Stella loves spending time with her mom and brother and her best friend Jenny. Trouble is, Jenny is in another class this year, and Stella feels very lonely.

When a new boy arrives in Stella's class, she really wants to be his friend, but sometimes Stella accidentally speaks Spanish instead of English and pronounces words wrong, which makes her turn roja. Plus, she has to speak in front of her whole class for a big presentation at school! But she better get over her fears soon, because Stella Díaz has something to say!

Stella Díaz Has Something to Say introduces an infectiously charming new character with relatable writing and adorable black-and-white art throughout. Simple Spanish vocabulary is also integrated within the text, providing a bilingual element.

Praise for Stella Diaz Has Something to Say

"Readers will cheer as they see how, with the help of her friends and family, Stella overcomes her shyness . . . A nice and timely depiction of an immigrant child experience." —Kirkus Reviews

Praise For Stella Diaz Has Something to Say…

“Drawing on her own childhood, Dominguez smoothly blends Spanish and English into the narration and dialogue, Stella’s Mexican-American culture fully informs her perspective and family life, and chunky spot art helps establish the setting. Readers should easily relate to Stella, her struggle to use her voice, and the way she feels caught between worlds at school and at home.” —Publishers Weekly

“Dominguez’s novel introduces a character many readers can relate to, especially bilingual kids or English language learners who struggle with expressing themselves. An excellent, empowering addition to middle grade collections.” —Booklist

“A nice and timely depiction of an immigrant child experience.” —Kirkus Reviews

“Readers will agree with Stella’s mother and brother that she is, as her name suggests, a star.” —The Bulletin of the Center for Children's Books

“Many readers will relate to and sympathize with the protagonist. Lively interspersed black-and-white illustrations showing elements of Stella’s day-to-day life and of her imagination add dimension to a rich narrative.” —Horn Book

“Stella Díaz Has Something to Say is delightfully rich, both humorous and sensitive at the same time. This is the story of a curious girl who longs to fit in, but also feels the need to be herself, learning how to speak up in two languages.” —Margarita Engle, Young People's Poet Laureate

“Stella Díaz is a delight! Young readers will love the story of this shy, sweet, and very creative girl finding her voice.” —Monica Brown, author of the Lola Levine series

“Shy yet spunky Stella speaks to feeling different, to conquering fears in order to make a new friend, and to learning that, like the starfish who shares her name—Estrella—she is stronger than she thinks.” —Danielle Davis, author of Zinnia and the Bees

“An inspiring tale of self-discovery. Stella Diaz speaks for anyone who has struggled to juggle different sides of their identity. Which is, of course, all of us.” —Minh Le, author of Let Me Finish!