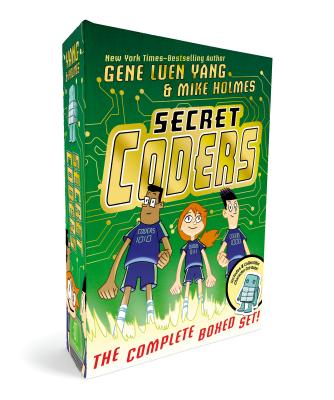 Plus includes a set of six collectable character cut-outs of your favorite Secret Coders characters!

Secret Coders
Welcome to Stately Academy, a school which is just crawling with mysteries to be solved! The founder of the school left many clues and puzzles to challenge his enterprising students.

Secret Coders: Paths & Portals
In the last volume, Hopper and Eni discovered a robot in the supply closet and programmed him to do mischief. Now they're trapped in an underground lair, and they must use their new programming skills to escape.

Secret Coders: Secrets & Sequences
Hopper, Eni, and Josh won't rest until they've learned the whole story of the Stately Academy, but they aren't the only ones interested in the school's past...

Secret Coders: Robots & Repeats
Dr. One-Zero has added a new class to Stately Academy's curriculum. But in "Advanced Chemistry," they only teach one lesson: how to make Green Pop!

Secret Coders: Potions & Parameters
At long last, the Coders have found Hopper's missing father—but he's not the same. He drank Professor One-Zero's poisonous concoction, Green Pop. Now he's in a blissful stupor and all he cares about is the color green.

Secret Coders: Monsters & Modules
The Coders always knew their programming skills would take them far, but they never guessed it would take them to another dimension! To save humanity, they must travel to the two-dimensional world of Flatland. But to open the gateway, they must first write their most difficult code yet!

"Gene Luen Yang’s talent is prodigious, his enthusiasm contagious . . . Even this confirmed technophobe was ready to learn coding." —Katherine Applegate, author of Crenshaw and The One and Only Ivan

"Secret Coders not only uses Logo but also touches on computer fundamentals like binary code and the three major ways that code is organized . . . Readers will learn them all, right alongside Hopper and Eni, not as something dry or rote, but something transformative." —Wired