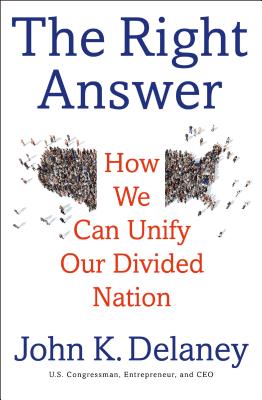 How We Can Unify Our Divided Nation

The first declared candidate for president in 2020 delivers a passionate call for bipartisan action, entrepreneurial innovation, and a renewed commitment to the American idea

The son of a union electrician and grandson of an immigrant, John K. Delaney grew up believing that anything was possible in America. Before he was fifty, he founded, built and then sold two companies worth billions of dollars. Driven by a deep desire to serve, in 2012 he stepped away from his businesses, ran for Congress, and won. Now he has a new mission: unifying our terribly divided nation and guiding it to a brighter future.

As a boy, Delaney learned the importance of working hard, telling the truth and embracing compromise. As an entrepreneur, he succeeded because he understood the need to ensure opportunity for all, focus on the future, and think creatively about problem-solving. In these pages, he illustrates the potency of these principles with vivid stories from his childhood, his career in business, his family, and his new life as a politician. He also writes candidly about the often frustrating experience of working on Capitol Hill, where many of his colleagues care more about scoring political points than improving the lives of their fellow Americans. With a clear eye and an open heart, he explains that only by seeing both sides of anargument and releasing our inner entrepreneur can we get back to constructive, enlightened governing.

Seventy years ago, John F. Kennedy appealed to our best instincts when he said, “Let us not seek the Republican answer or the Democratic answer but the right answer.” In this inspiring book, John K. Delaney asks all of us to cast aside destructive, partisan thinking and join him in an urgent endeavor: working together to forge a new era of American greatness.


Praise For The Right Answer: How We Can Unify Our Divided Nation…

“John Delaney has written a thoughtful prescription for our nation, in an era when empathy, thoughtfulness, and real leadership are sorely needed. Read what he has to say – it will make you think.”--General Stanley McChrystal, U.S.A. (Ret.)

“With an entrepreneur’s ingenuity and a public servant’s empathy, John Delaney has brought a deeply innovative approach to American government. In divided political times, this book offers a thoughtful and compelling vision for policy makers at every level.”--Representative Joseph P. Kennedy III (D-Massachusetts)

“John Delaney has brought entrepreneurial insights and passion to business and government. His commonsense, bipartisan approach to our nation’s challenges merits attention from Americans of all political stripes and beliefs. If you care about a better way to solve our problems at this critical time, this book is a must read.”--Steve Case, chairman and CEO, Revolution, and cofounder of America Online

“As I’ve heard John Delaney say many times, ‘The cost of doing nothing is not nothing.’ With his unique combination of business skills, public service, philanthropy and leadership experience, John understands that we must act boldly if we hope to improve the lives of all Americans. In this book, he offers his plan for exactly how we can do that.”--Representative Elijah Cummings (D-Maryland)

“Every so often, a politician has the courage, the optimism, and the intelligence to chart a different path for the country. John Delaney is offering a Churchill-like moment: He tells the hard truth about our problems and stands for a rare (and brave) proposition – that political compromise is a good thing and is the key to growth and progress.” --Katherine Bradley, President, CityBridge Foundation

“John Delaney’s book is a practical and optimistic look at the future of our country, and how he sees us moving forward with solutions, not divisions. I always say we should be building bridges, not walls, and he is working every day to put that into practice. Delaney is an inspiration to us all – he is a true leader in a world that needs more leadership.”--José Andrés, chef/owner, ThinkFoodGroup & minibar by José Andrés, and founder, World Central Kitchen

“In these times of severe and destructive partisanship the American people have a unique opportunity to be represented by a man who represents the best of what has truly made us great: a desire to work together for solutions, a proven belief in free enterprise, hard work and commonsense all coupled with compassion. John Delaney’s book is a starting point for the possibilities of this unlikely candidate.”--Former Representative Richard L. Hanna (R-New York)

“John Delaney has been a leader in finding innovative, bipartisan solutions to both help real people live better lives and to measure outcomes, so we know what works and what doesn't. This book provides a roadmap to refocus government to deliver on a more promising future rather than accepting the divided and dysfunctional status quo.”--Sonal Shah, executive director, Beeck Center for Social Impact and Innovation, Georgetown University, and former director of the White House Office of Social Innovation and Civic Participation

“John Delaney is a rare breed of politician who understands that we get the best outcomes for our citizens when the government, the private sector, and the nonprofit world work together. This book shows how his understanding of all three spheres makes him a leader who can make progress against the challenges we face.” --Jim Sorenson, founder and CEO, Sorenson Impact Foundation

John K. Delaney, the United States Representative for Maryland's 6th congressional district, was one of America’s most innovative and successful entrepreneurs before he entered politics. The co-founder and CEO of two companies, HealthCare Financial and CapitalSource, both of which were ultimately sold for enormous sums, he is an active philanthropist. A Democrat who is now in his third term in Congress, he was recently named by Fortune magazine as one of the World’s 50 Greatest Leaders. He and his wife April have four daughters and live in Montgomery County, Maryland.
Loading...
or
Not Currently Available for Direct Purchase