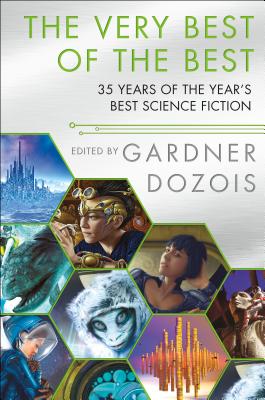 The Very Best of the Best (Paperback)

For the first time in a decade, a compilation of the very best in science fiction, from a world authority on the genre.

For decades, the Year's Best Science Fiction has been the most widely read short science fiction anthology of its kind. Now, after thirty-five annual collections comes the ultimate in science fiction anthologies. In The Very Best of the Best, legendary editor Gardner Dozois selects the finest short stories for this landmark collection, including short fiction from authors such as Charles Stross, Michael Swanwick, Nancy Kress, Greg Egan, Stephen Baxter, Pat Cadigan, and many many more.

Gardner Dozois (1947-2018), one of the most acclaimed editors in science-fiction, won the Hugo Award for Best Editor 15 times. He was the editor of Asimov’s Science Fiction Magazine for 20 years. He also served as the editor of The Year’s Best Science Fiction anthologies and co-editor of the Warrior anthologies, Songs of the Dying Earth, and many others. As a writer, Dozois twice won the Nebula Award for best short story. He was inducted into the Science Fiction Hall of Fame in 2011 and received the Skylark Award for Lifetime Achievement. He lived in Philadelphia, Pennsylvania.
or
Buy Here
Copyright © 2020 American Booksellers Association