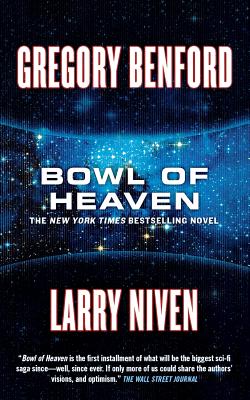 In Bowl of Heaven, the first collaboration by science fiction authors Larry Niven (Ringworld) and Gregory Benford (Timescape), the limits of wonder are redrawn once again as a human expedition to another star system is jeopardized by an encounter with an astonishingly immense artifact in interstellar space: a bowl-shaped structure half-englobing a star, with a habitable area equivalent to many millions of Earths…and it's on a direct path heading for the same system as the human ship.


Praise For Bowl of Heaven…

“Bowl of Heaven is the first installment of what will be the biggest sci-fi saga since—well, since ever. If only more of us could share the authors’ visions, and optimism” —The Wall Street Journal

“It's easy to settle in and enjoy the sci-fi smorgasbord served up by Gregory Benford and Larry Niven. . .There's a lot to savor. Fans of so-called "hard science fiction" will enjoy the descriptions of ionic scoop fusion drives and all the solar-powered gadgets put to practical use during deep space exploration.” —The Associated Press

“If you like hard SF with mind-stretching ideas--both physical and psychological--then you definitely want to read this book.” —Analog

“It's been more than 40 years since Ringworld and nearly that long since the Galactic Center Saga knocked our socks off, and I wonder how much it takes these days to render us barefoot and gaping at the scale and scope of an imaginary world. . . . But Benford & Niven have given themselves the space (conceptual and page-count) to spread out. Bowl of Heaven has room to accommodate both the thrill-ride and head-scratching sides of its sub-tradition, and I think when the second half appears, this new effort by two of the Old Masters will hold its own just fine.” —Locus

“First-time collaborators Niven (Ringworld series; coauthor, Beowulf's Children) and Benford (Timescape; Galactic Center series) have combined their award-winning talents for storytelling to create a series opener that should find a welcome reception from fans of the authors as well as those who love hard science and mental challenges.” —Library Journal

“A solid work that will appeal to fans of classic hard SF.” —Publishers Weekly

Larry Niven is the award-winning author of the Ringworld series, along with many other science fiction masterpieces and fantasy including the Magic Goes Away series. His Beowulf's Children, co-authored with Jerry Pournelle and Steven Barnes, was a New York Times bestseller. He has received the Nebula Award, five Hugos, four Locus Awards, two Ditmars, the Prometheus, and the Robert A. Heinlein Award, among other honors. He lives in Chatsworth, California.
Loading...
or support indie stores by buying on