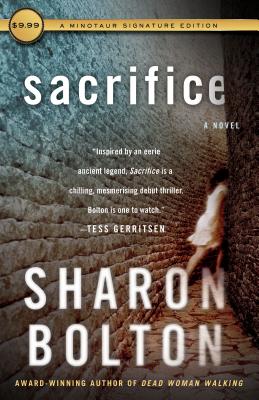 Inspired by an ancient legend, Sharon Bolton's critically acclaimed debut follows the shocking investigation of a decades-long pattern of kidnapping and murder.

In this masterful debut that starts off as a mystery and becomes much more, Tora Hamilton is an outsider at her new home on the rocky, windswept Shetland Islands, a hundred miles from the northeastern tip of Scotland. Though her husband grew up here, it’s the first time he’s been back in twenty years. Digging in the peat on their new property, Tora unearths a human body: at first glance a centuries-old bog body, interesting but not uncommon. But realizing that the body is in fact much newer, that the woman’s heart has been cut out and that she was killed within a few days of bearing a child, Tora, herself an obstetrician, becomes obsessed with finding out what happened to her—even when the police, her colleagues, and eventually her husband warn her against getting involved.

Reading town records and researching local lore, Tora discovers a disturbing link to ancient Shetland legend and uncovers a collection of deep, dark secrets—the kind of secrets worth killing for.

Sacrifice is a bone-chilling, spellbinding debut that will grip readers from its beginning to its startling end.

*BONUS CONTENT: This edition of Sacrifice includes a new introduction from the author and a discussion guide

SHARON BOLTON is a Mary Higgins Clark Award winner and an ITW Thriller Award, CWA Gold Dagger and Barry Award nominee. Her books included the Lacey Flint novels: Now You See Me, Dead Scared, Lost, and A Dark and Twisted Tide. She lives near London, England.

S. J. BOLTON (AKA Sharon Bolton), a Mary Higgins Clark Award winner and an ITW and Barry Award nominee, has also been shortlisted for CWA Gold Dagger Award. She grew up in Lancashire, England, and now lives near Oxford with her family. Her books included the Lacey Flint novels: Now You See Me, Dead Scared, Lost, and A Dark and Twisted Tide.
Loading...
or
Not Currently Available for Direct Purchase