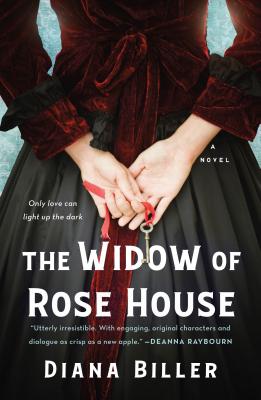 The Widow of Rose House (Paperback)

"The Widow of Rose House is close to perfection and any lover of historical romance will adore this debut." - Smart Bitches Trashy Books

It’s 1875, and Alva Webster is ready for a fresh start. After three years of being pilloried in the presses for fleeing her abusive husband, his sudden death allows her to return to New York where she is determined to restore a dilapidated Hyde Park mansion, and hopefully her reputation at the same time. She is decidedly not supposed to fall in love.

But when a haunting at her new home threatens her careful plans, she must seek help from the eccentric and brilliant and - much to her dismay - very handsome Professor Samuel Moore. Alva doesn’t need more complications in her life, especially not a convention-flouting, scandal-raising one like Sam. Unfortunately, Sam is the only one who can help. Together, the two delve into the tragic secrets wreathing Alva’s new home while Sam attempts to unlock Alva’s history—and her heart.

Set during the Gilded Age in New York City, The Widow of Rose House is a gorgeously romantic debut by Diana Biller, with an intrepid and resilient American heroine guaranteed to delight readers as she starts over and finds true love.

Diana Biller lives in Los Angeles with her husband and their very good dog. The Widow of Rose House is her debut novel.

Praise For The Widow of Rose House: A Novel…

"A chemistry-fueled debut with a bit of a ghost story, great for readers of gothic romance." - BOOKLIST

"The Widow of Rose House is close to perfection and any lover of historical romance will adore this debut." - SMART BITCHES TRASHY BOOKS

"A ghost-hunting adventure and sweeping romance in equal parts, and peppered with moments of breath-holding tension, it amazes me that this Gilded Age gem of a story is a debut effort. It’s a moving, evocative, beautifully told and, at times, chilling read, and even when I desperately wanted to speed ahead to find out what happens in the end, I made myself savour every exquisite last word of it." - NATASHA IS A BOOK JUNKIE

BOOKRIOT, "10 Ghost Romances To Ring In The Halloween Season"

"Get ready to devour Diana Biller's magnificent debut novel in one sitting. The Widow of Rose House boasts memorable and vibrant characters, a delicious romance, great period detail, and a hint of the supernatural. Alva and Sam spring off the page and to life, so that I now feel as though they are friends of mine. This novel is a treat not to be missed!" - Alyssa Palombo, author of The Spellbook of Katrina Van Tassel