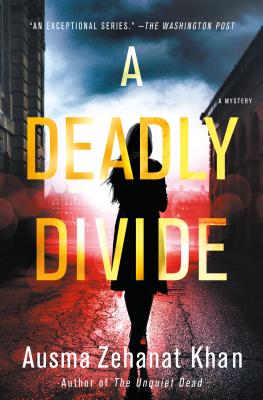 In the aftermath of a mass shooting at a mosque in Quebec, the local police apprehend Amadou Duchon—a young Muslim man at the scene helping the wounded—but release Etienne Roy, the local priest who was found with a weapon in his hands.

The shooting looks like a hate crime, but detectives Esa Khattak and Rachel Getty sense there is more to the story. Sent to liaise with a community in the grip of fear, they find themselves in fraught new territory, fueled by the panic and suspicion exploited by a right-wing radio host.

As Rachel and Esa grapple to stop tensions shutting the case down entirely, all the time, someone is pointing Esa in another direction, a shadowy presence who anticipates his every move.

A Deadly Divide is a piercingly observed, gripping thriller that reveals the fractures that try to tear us all apart: from the once-tight partnership between detectives Esa and Rachel, to the truth about a deeply divided nation.


Praise For A Deadly Divide: A Mystery (Rachel Getty and Esa Khattak Novels #5)…

“Khan peoples her police procedural with believably nuanced characters to highlight the consequences of hate. The tension never lets down.”—Kirkus

“Ausma Zehanat Khan's procedurals have redefined the landscape of Canadian crime writing. This is a must-read for any who believe in crime fiction as a space to both process trauma and sound the call for action.”—Crime Reads, "Best Crime Books of 2019"

“Khan has established herself as one of the genre's most thoughtful practitioners. With great intelligence and sensitivity, Khan portrays the ease of online radicalization and the ways in which ideological divides cement into far more violent ones. It's a piece of fiction that manages to tell a truth even non-fiction has had trouble communicating.”—Globe and Mail (Toronto)

“A Deadly Divide feels like a homecoming, but to a home that’s no longer a safe space. I can’t recommend this timely and urgent read enough.”—LitHub

“In a fast-paced and expertly plotted mystery, Khan explores the depths of human complexity and the very human costs of hate.”—Shelf Awareness

“One of my favorite procedural series…This was my favorite so far. Khan is an excellent writer who explores all the nuances in communities and social issues without creating caricatures or stereotypes.”—Book Riot (A Favorite Mystery of 2019)

“Absorbing. It's tempting to turn to mysteries, where justice is generally served and conflict is brought to a resolution, when the world seems overwhelming. Ausma Zehanat Khan uses the conventions of the genre to explore the world we live in, one that badly needs more justice.”—Reviewing the Evidence

AUSMA ZEHANAT KHAN holds a Ph.D. in International Human Rights Law with a specialization in military intervention and war crimes in the Balkans. She has practiced immigration law and taught human rights law at Northwestern University and York University. She is the former Editor in Chief of Muslim Girl magazine, the first magazine targeted to young Muslim women. Khan currently lives in Colorado with her husband. The Unquiet Dead is her first novel.
Loading...
or support indie stores by buying on
(This book is on backorder)