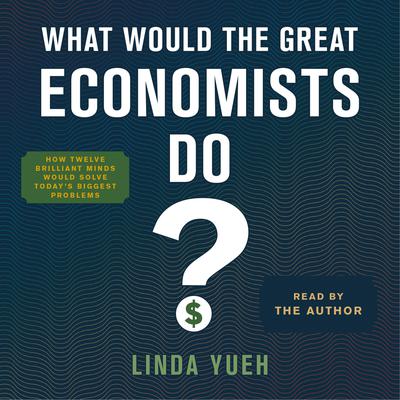 What Would the Great Economists Do? (Digital Audiobook)

A timely exploration of the life and work of world-changing thinkers—from Adam Smith to John Maynard Keynes—and how their ideas would solve the great economic problems we face today.

Acclaimed economist and BBC broadcaster Linda Yueh profiles the great economic minds who focused on the big questions: growth, innovation, and the nature of markets. Most of them have won the Nobel Prize. All of them have had lasting impact on both the development of the discipline and how public policy has been and continues to be shaped. But Dr. Yueh goes a step further: In accessible and clear prose, she will explain the impact their respective research has on combating today's great economic problems.

For example, she will ask: Milton Friedman, are central banks doing too much? Friedrich Hayek, can financial crashes be prevented? Douglass North, why are so few countries rich?

After years of experience providing economic literacy to the public through podcasts, documentaries, lectures, and television programs, Dr. Yueh will bring that wealth of expertise to the page in her first trade book for a general reader. What Would the Great Economists Do? offers a concise history of modern economics, the trailblazing men and women who developed the field, and, more fundamentally, how their findings would solve everything from global inequality to what drives innovation.

DR. LINDA YUEH is an economist, broadcaster, and author. She is a a Fellow at Oxford, a Visiting Senior Fellow at IDEAS, the London School of Economics’ foreign policy think tank, and serves on the supervisory Policy Committee of the Centre for Economic Performance at the London School of Economics and Political Science. Previously, she was Chief Business Correspondent for BBC News and host of Talking Business with Linda Yueh on BBC World News and BBC News Channel based in Singapore. She had been Economics Editor and anchor at Bloomberg TV in London. She splits her time between the US and the UK. Dr. Yueh can be found on Twitter @lindayueh.