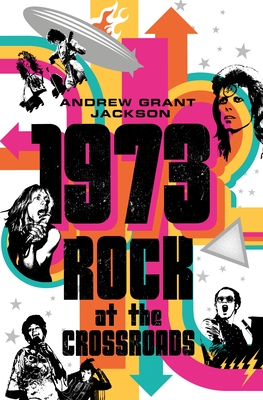 Rock at the Crossroads

A fascinating account of the music and epic social change of 1973, a defining year for David Bowie, Bruce Springsteen, Pink Floyd, Elton John, the Rolling Stones, Eagles, Elvis Presley, and the former members of The Beatles.

1973 was the year rock hit its peak while splintering—just like the rest of the world. Ziggy Stardust travelled to America in David Bowie’s Aladdin Sane. The Dark Side of the Moon began its epic run on the Billboard charts, inspired by the madness of Pink Floyd's founder, while all four former Beatles scored top ten albums, two hitting #1.

FM battled AM, and Motown battled Philly on the charts, as the era of protest soul gave way to disco, while DJ Kool Herc gave birth to hip hop in the Bronx. The glam rock of the New York Dolls and Alice Cooper split into glam metal and punk. Hippies and rednecks made peace in Austin thanks to Willie Nelson, while outlaw country, country rock, and Southern rock each pointed toward modern country. The Allman Brothers, Grateful Dead, and the Band played the largest rock concert to date at Watkins Glen.

Led Zep’s Houses of the Holy reflected the rise of funk and reggae. The singer songwriter movement led by Bob Dylan, Neil Young, and Joni Mitchell flourished at the Troubadour and Max’s Kansas City, where Bruce Springsteen and Bob Marley shared bill. Elvis Presley’s Aloha from Hawaii via Satellite was NBC’s top-rated special of the year, while Elton John’s albums dominated the number one spot for two and a half months.

Just as U.S. involvement in Vietnam drew to a close, Roe v. Wade ignited a new phase in the culture war. While the oil crisis imploded the American dream of endless prosperity, and Watergate’s walls closed in on Nixon, the music of 1973 both reflected a shattered world and brought us together.

Praise for 1973: Rock at the Crossroads

“Jackson's book paints a vivid portrait of the year through the lens of popular music — mostly rock, but also country and hip-hop … His analysis of sexuality and rock music is particularly interesting ... Jackson also proves to have a real talent for evoking the places that made 1973 such a consequential year in music.” —NPR

“A comprehensive account of the year of 1973 and its legendary music and momentous social change.” —Rolling Stone

“It’s the excellent—and frequently hilarious—saga of a moment when the whole sprawling pageant of pop music was one great big band on the run.” —Rob Sheffield, author of Dreaming the Beatles

“One of the best books of 2019 … Jackson’s storytelling is so well supported and energetically told that he had my attention even when discussing artists that would normally send me rushing to my radio’s off switch.” —Psychobabble

“Jackson’s latest is a book so abundant in fact and feelings it can serve equally as an entertaining trip back in time and an all-knowing reference source for, perhaps, the last truly triumphant year in rock-and-roll.” —Jambands.com

“A capacious, informative, amusing, broad-minded history of the musical landscape in a single year, caught between the explosive creativity of the past and the corporatized near-future. Read it and rediscover one of the great years in musical history." —Saul Austerlitz, author of Just a Shot Away and Generation Friends

“Jackson not only weaves the sounds of the times into a shared tapestry, but provides an illuminating portrait of a particularly weird and wonderful year.” —Erik Davis, author of High Weirdness: Drugs, Esoterica, and Visionary Experience in the Seventies

“Jackson makes a good case for this as one of the most pivotal in terms of the art, commerce and personalities.” —The Oakland Press

“A joy to be read.” —Tulsa Book Review

“A well-researched and engrossing read.” —Harold Bronson, co-founder Rhino Records; author of My British Invasion and The Rhino Records Story

“Highly regarded as perhaps the rock book of the year, [1973] holds something for everybody.” —KGKS 93.9 the River

"It reads like a cracking novel, immersed in the cultural and social tumult of the times, as Jackson strolls leisurely through the chaos and minefields to deliver a series of tales of rock ‘n roll glory, transition, conflict and drama without mythologizing any of it." —Elmore Magazine

Andrew Grant Jackson is the author of 1965: The Most Revolutionary Year in Music, and Still the Greatest: The Essential Songs of the Beatles’ Solo Careers. He directed and co-wrote the feature film The Discontents (2004) starring Amy Madigan. He has written for Slate’s ‘Blogging the Beatles,’ Yahoo!, music magazines Burn Lounge, Mean Street, Dispatch and the Hollywood monthly magazine Ingenue. He lives in California.
Loading...
or support indie stores by buying on