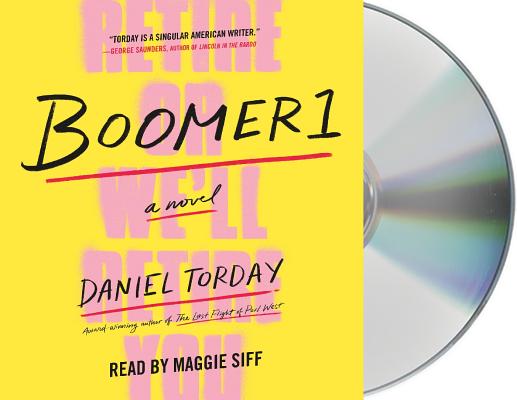 "Torday is a singular American writer with a big heart and a real love for the world. He has the rare gift for writing dynamic action scenes while being genuinely funny." —George Saunders, New York Times bestselling author of Lincoln in the Bardo

This program is read by Maggie Siff, acclaimed star of Mad Men, Billions, and Sons of Anarchy.

Told through the perspectives of Mark, Cassie, and Mark’s mother, Julia, a child of the '60s whose life is more conventional than she ever imagined, Daniel Torday's Boomer1 is timely, suspenseful, and in every line alert to the siren song of endless opportunity that beckons and beguiles all of us.

"Torday writes exquisitely about our hallucinatory simultaneous realities, where lives are conducted onscreen and offline, networked to millions of strangers and tremendously alone.” -- Karen Russell, author of Swamplandia!

Praise For Boomer1: A Novel…