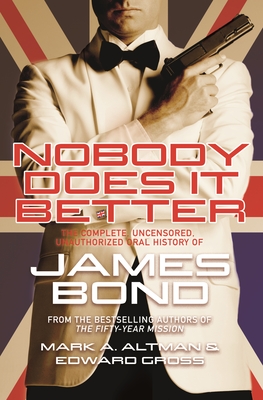 Nobody Does it Better

The ultimate oral history of the only gentleman secret agent with a license to kill… and thrill…telling the incredible, uncensored true stories of the James Bond franchise and spy mania.

For over five decades, the cinematic adventures of James Bond have thrilled moviegoers. Now, bestselling authors Mark A. Altman and Edward Gross take you behind-the-scenes of the most famous and beloved movie franchise of all-time filled with reflections from over 150 cast, crew, critics and filmmakers who reflect on the impact of this legendary movie franchise as well as share their thoughts about their favorite (and least) favorite 007 adventures and spy mania which gripped fans the world over in the wake of the success of the James Bond films.


From Russia--with love, course--to Vegas, from below the bright blue waters of the Bahamas in search of a missing nuclear weapon to the top of the Golden Gate Bridge, from below the seas in Stromberg’s new Noah's Ark of Atlantis into orbit with Hugo Drax, Nobody Does It Better: The Complete Uncensored, Unauthorized Oral History of James Bond tells the amazing, true story of the birth of James Bond through the latest remarkable James Bond adventures as well as the Spy mania classics that enthralled the world.

It’s Bond and Beyond from the critically acclaimed authors of the bestselling The Fifty-Year Mission and So Say We All.


Praise For Nobody Does it Better: The Complete, Uncensored, Unauthorized Oral History of James Bond…

“Fans of Ian Fleming's 007 novels and the James Bond movie franchise could not ask for a more exhaustive or sublimely entertaining book on their favorite spy than Nobody Does It Better. ”—Shelf Awareness

“The authors have done an exhaustive, masterful job of collecting interviews and editing memories, opinions and reflections of hundreds of creative artists, business executives, critics and even the occasional social scientist. What emerges is an intriguing look inside the sausage-making process that is television and film production.” – The Wall Street Journal on The Fifty Year Mission

"Slayers & Vampires is a new primary text to pour over, with plenty of behind-the-scenes tidbits about who hated whom and how TV shows are made."— The New York Times Book Review on Slayers & Vampires

"Breathtaking in scope and depth, this is a must-read for Star Trek lovers as well as anyone who wants a better understanding of how television and film production works" – Booklist on The Fifty Year Mission

“If you’re just dying for juicy secrets about the famous franchise, then your search is over. We just know you’re going to love this book; resistance is futile” – Bookish on The Fifty Year Mission

“The Fifty-Year Mission is a ‘Ken Burns’s The Civil War, Ezra Edelman’s O.J.: Made In America-class achievement.” – Chris Smith, Dorking Out podcast on The Fifty Year Mission

MARK A. ALTMAN has been hailed as "the world's foremost Trekspert" by the LOS ANGELES TIMES. Altman is a former journalist for such publications as THE BOSTON GLOBE, CINEFANTASTIQUE and GEEK. He is also the writer/producer of the beloved romantic comedy, FREE ENTERPRISE, starring William Shatner and Eric McCormack as well as the hit TV series AGENT X, CASTLE, NECESSARY ROUGHNESS and FEMME FATALES.
Loading...
or support indie stores by buying on