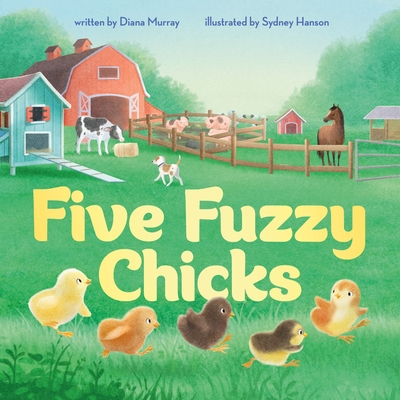 "Murray and Hanson have created what feels like an old classic that's simultaneously fresh and sweet... A bedtime countdown rhyme for every little farmer." —Kirkus Reviews

Five adorable baby chickens are determined to have some fun before bed in Five Fuzzy Chicks by Diana Murray, a rhyming farm picture book with counting elements featuring illustrations by Sydney Hanson.

It’s time for bed, but these five chicks are full of energy!

They race out of the coop to visit all of the other animals. But the dog is so snuggly and the hay is so comfy, and these five fuzzy chicks can’t help but fall asleep one by one.

Before long, the sleeping chicks are scattered all over the farm! What will Mama Hen do?

As playful as it is soothing, Five Fuzzy Chicks is the perfect story for tucking your own little chicks into bed.

Praise for Doris the Bookasaurus:

Sydney Hanson was raised in Minnesota alongside numerous pets and brothers. In addition to her traditional illustrations, Sydney is an experienced 2D and 3D production artist and has worked for several animation shops, including Nickelodeon and Disney Interactive. In her spare time she enjoys traveling and spending time outside with her adopted brother, a Labrador retriever named Cash. She is the illustrator of the Unicorn Princesses series and the picture book, Next to You. Sydney lives in Los Angeles.
www.sydwiki.tumblr.com