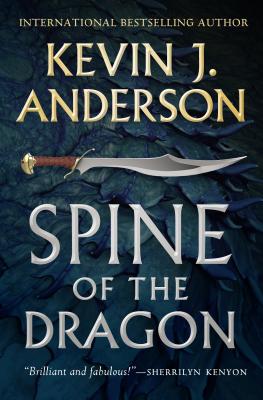 Spine of the Dragon

New York Times bestselling author Kevin J. Anderson triumphantly returns to epic fantasy with the Wake the Dragon series. Spine of the Dragon is a politically charged adventure of swords, sorcery, vengeance, and the rise of sleeping giants.

Two continents at war, the Three Kingdoms and Ishara, are divided by past bloodshed. When an outside threat arises—the reawakening of a powerful ancient race that wants to remake the world—the two warring nations must somehow set aside generational hatreds and form an alliance to fight their true enemy.


Praise For Spine of the Dragon: Wake the Dragon #1…

“A brisk and engaging narrative.”—Booklist

“The pages turn almost by themselves, because you absolutely, categorically have to find out what happens next.”—Kirkus

“One can read the Imager stories as straight fantasy, or as the closest of social commentaries ... without ever degenerating into mere “message” fiction. . . . [T]hey are artful, loving, and lovely configurations of the human experience during transitions one every sort.”—The Nameless Zine

“An epic fantasy that has all the complexity and depth of Dune.”—Nerd Alert News

“A must-read for any fantasy fan, brilliant and fabulous! One of the greatest talents writing today, Kevin J. Anderson is a master of adventures that are filled with dynamic, unforgettable characters.” —Sherrilyn Kenyon

“A fast-paced, enjoyable read. Concise description is paired with immediate action that plunges the reader irrevocably into a world teetering on the brink of a conflagration.” —Robin Hobb

“A setting so rich and detailed that the reader will suspend disbelief and actually be there.” —R.A. Salvatore

"Just what fantasy readers lust after—a complex and intricately detailed universe descending into a war. The details of this exotic world are exquisite. The sprawling cast of characters and creatures is fascinating. The action is terrifying. Let the mayhem begin.” —Terry Goodkind

“A hell of a kick-off to a new series.”—The NerdBlitz