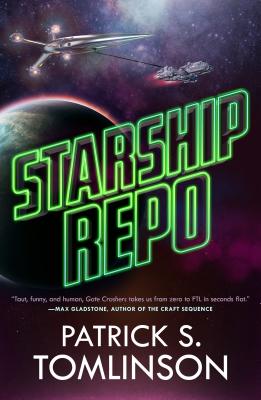 Starship Repo is a fast-paced romp through the galaxy from Patrick S. Tomlinson.

Firstname Lastname is a no one with nowhere to go. With a name that is the result of an unfortunate clerical error and destined to be one of the only humans on an alien space station. That is until she sneaks aboard a ship and joins up with a crew of repomen (they are definitely not pirates).

"Tomlinson's well-plotted tale of first contact pinballs between hard science-fiction and hilarity, delivering a thrilling yarn that'll have you both laughing and biting your nails, often at the same time. Most of all, though, it's damn fun!" — Matt Forbeck, Halo: Bad Blood