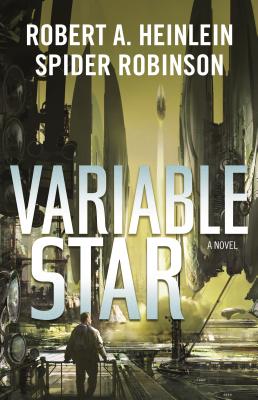 When Joel Johnston first met Jinny Hamilton, it seemed like a dream come true. And when she finally agreed to marry him, he felt like the luckiest man in the universe.

There was just one small problem. He was broke. His only goal in life was to become a composer, and he knew it would take years before he was earning enough to support a family.

But Jinny wasn't willing to wait. And when Joel asked her what they were going to do for money, she gave him a most unexpected answer. She told him that her name wasn't really Jinny Hamilton---it was Jinny Conrad, and she was the granddaughter of Richard Conrad, the wealthiest man in the solar system.

And now that she was sure that Joel loved her for herself, not for her wealth, she revealed her family's plans for him---he would be groomed for a place in the vast Conrad empire and sire a dynasty to carry on the family business.

Most men would have jumped at the opportunity. But Joel Johnston wasn't most men. To Jinny's surprise, and even his own, he turned down her generous offer and then set off on the mother of all benders. And woke up on a colony ship heading out into space, torn between regret over his rash decision and his determination to forget Jinny and make a life for himself among the stars.

He was on his way to succeeding when his plans--and the plans of billions of others--were shattered by a cosmic cataclysm so devastating it would take all of humanity's strength and ingenuity just to survive.

Faithful to the spirit of Heinlein's original vision, and laced with contemporary touches that will appeal to modern readers, Variable Star is a rare treat for the Grand Master's many fans.

“Completing a book from notes by a dead author is almost always a mistake. But Robert A. Heinlein apparently isn't really dead. He was obviously standing at the side of Spider Robinson as he wrote this book, guiding his hand. Variable Star will delight the fans of the greatest science fiction writer who ever lived, and at the same time, stays true to Spider's passionate themes of optimism, kindness, and humanity's future among the stars.” —John Varley, Hugo and Nebula Award-winning author of The Persistence of Vision and Steel Beach

“I've already laughed hard and wanted to cry....This book is a delight and I love you for doing it. I love you even more for doing it so damned well. Thank you.” —David Crosby, Grammy Award winning singer/songwriter and member of The Byrds and Crosby, Stills & Nash

Spider Robinson, winner of three Hugos and a Nebula, was born in the Bronx and raised on Long Island, and has been a Canadian resident for 30 years. Holder of a bachelor's degree in English from the State University of New York, he worked as a folksinger and journalist before publishing his first story in Analog in 1973. He now lives on an island outside Vancouver, B.C., where he raises and exhibits hopes.

Over ten of Robinson's books are set in Callahan's Place (including Callahan's Crosstime Saloon and Callahan's Key), a fabulous tavern founded by a time traveler, where puns flow as freely as beer, and smell far worse. Robinson has contributed a regular editorial column, "Future Tense," to Canada's national newspaper, The Globe & Mail, since 1995. In 2000, he released Belaboring the Obvious, a CD of original music with the legendary Amos Garrett ("Midnight at the Oasis") on lead guitar, and in 2001 he was a celebrity judge at the Cannabis Cup in Amsterdam.