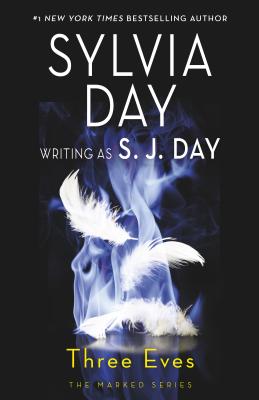 The Marked Series (Eve of Darkness, Eve of Destruction, Eve of Chaos)

From #1 New York Times bestselling author Sylvia Day (writing as S.J. Day) comes Three Eves, starting with Eve of Darkness. This steamy urban fantasy series tells the story of Evangeline Hollis, a heavenly bounty hunter, who’s cursed by God, hunted by demons, and desired by none other than Cain and Abel. Uncontrollable bloodlust, dark and sexy desires, disasters of biblical proportions… S.J. Day’s epic series has it all and is not to be missed.

Eve of Darkness — Years ago, Evangeline Hollis spent a blistering night with a darkly seductive man she can't forget. Now Eve is thrust into a world where sinners are marked and drafted to kill demons. Her former one-night stand, Cain, is now her mentor-and his equally sexy brother Abel is her new boss.

Eve of Destruction — When Eve’s training class takes a field trip to an abandoned military base, things take a dark turn. Meanwhile, her body is still adapting to her new abilities and the challenges that came with them—such as uncontrollable bloodlust…which seems to be inciting another kind of lust altogether.

Eve of Chaos — Eve runs over Satan's hellhound during training, so he puts a bounty on her head, and every demon in the country wants to deliver. Meanwhile, as Cain's role in Eve's life becomes more and more uncertain, Abel doesn't hesitate to step in.


Praise For Three Eves: The Marked Series (Eve of Darkness, Eve of Destruction, Eve of Chaos)…

"When we last saw new 'Mark' Eve Hollis she was on the precipice of life and death, so thankfully Day wastes no time jumping back into the fray. This trilogy has a complex mythos that continues to place legendary siblings Cain and Abel at odds. Plenty of action keeps the middle book racing along. Day has a genuine flair for urban fantasy!" —RT Book Reviews

"A sizzling, heart-pounding urban fantasy that thrilled and fascinated me from beginning to end. It's got smokin' hot angels, blood-chilling demons, and questions that go deeper than who's kicking whose butt." —Jeri Smith-Ready, New York Times bestselling author

Sylvia Day is the #1 New York Times and #1 international bestselling author of over twenty award-winning novels sold in more than 40 countries, including (under the pen name S. J. Day) The Marked Trilogy. Day is a #1 bestselling author in 28 countries, with tens of millions of copies of her books in print. Her Crossfire series has been optioned for television by Lionsgate. She has won the RT Book Reviews Reviewers’ Choice Award and been nominated for Romance Writers of America's prestigious RITA award twice.
Loading...
or support indie stores by buying on