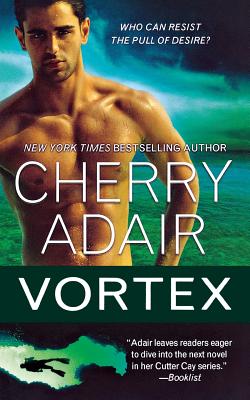 The thrid book in Cherry Adair's Cutter Cay series plunges into a Vortex of high-sea adventure and romance, where a long-lost treasure is a deadly lure—and love is the most dangerous current of all…

Searching for a sunken ship off the coast of Peru, treasure hunter Logan Cutter manages to pull a very different kind of prize from the sea—beautiful gallery owner Daniela Rosada. Dani claims she was thrown overboard by ruthless pirates and begs for his protection. But Logan is no stranger to a woman's lies, and something about her story doesn't add up.

With her knowledge of Peruvian artifacts, Dani offers to help Logan translate an ancient map that will lead them to a shipwrecked treasure—and into a carefully laid trap. But the closer they get, the deeper she falls for him, not realizing that Logan is hiding a secret of his own. By the time she learns the truth about his boat, his brothers—and his blood feud with pirates—it's too late. By falling in love, they've set a course for disaster…

"Thrilling and hazardous! When you add in the sensuous sizzle, you have the full Adair package." —Romantic Times on Undertow

New York Times bestselling author Cherry Adair has carved a niche for herself with her sexy, sassy, fast-paced, action adventure novels which have appeared on numerous bestsellers lists, won dozens of awards and garnered praise from reviewers and fans alike.  She hates first drafts, has a passion for mentoring unpublished writers, and is hard at work on two new series – CUTTER CAY and LODESTONE.
Loading...
or support indie stores by buying on