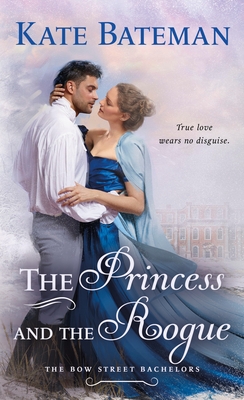 The Princess and the Rogue

A princess in disguise is forced to live with a rogue in order to protect her from danger in this fun, sexy regency romance from Kate Bateman.

In The Princess and the Rogue, Bow Street agent Sebastien Wolff, Earl of Mowbray, doesn’t believe in love—until a passionate kiss with a beautiful stranger in a brothel forces him to reconsider. When the mysterious woman is linked to an intrigue involving a missing Russian princess, however, Seb realizes her air of innocence was too good to be true.

Princess Anastasia Denisova has been hiding in London as plain ‘Anna Brown’. With a dangerous traitor hot on her trail, her best option is to accept Wolff’s offer of protection—and accommodation—at his gambling hell. But living in such close quarters, and aiding Wolff in his Bow Street cases, fans the flames of their mutual attraction. If Anya’s true identity is revealed, does their romance stand a chance? Could a princess ever marry a rogue?


Praise For The Princess and the Rogue: A Bow Street Bachelors Novel…

BUZZFEED, "24 Romance Novels That Will Make Your Heart Feel Warmer And Cozier Than A Cable-Knit Sweater"

"This smart Regency romance and its resilient heroine are sure to win over readers." - Publishers Weekly (Starred Review)

"What's not to enjoy about a roguish former soldier and a Russian princess in disguise?...[A] thoroughly entertaining read." - BookPage

Praise for the Bow Street Bachelors

Kate Bateman, (also writing as K. C. Bateman), is the #1 bestselling author of historical romances, including her RITA® nominated Renaissance romp, The Devil To Pay, the Bow Street Bachelors series (This Earl of Mine, To Catch an Earl, and The Princess and the Rogue), along with the novels in the Secrets & Spies series (To Steal a Heart, A Raven’s Heart, and A Counterfeit Heart). When not writing novels that feature feisty, intelligent heroines and sexy, snarky heroes you want to both strangle and kiss, Kate works as a fine art appraiser and on-screen antiques expert for several popular TV shows in the UK. She splits her time between Illinois and her native England. Follow her on Twitter to learn more.
Loading...
or support indie stores by buying on