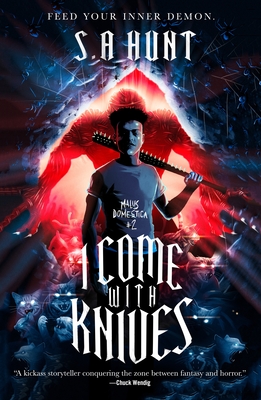 I Come with Knives

Chilling Adventures of Sabrina meets Joe Hill in S. A. Hunt’s I Come with Knives, a horror-tinged action-adventure about a punk YouTuber on a mission to hunt witches, one vid at a time

Robin – now armed with new knowledge about mysterious demon terrorizing her around town, the support of her friends, and the assistance of her old witch-hunter mentor – plots to confront the Lazenbury coven and destroy them once and for all.

Meanwhile, a dangerous serial killer only known as The Serpent is abducting and killing Blackfield residents. An elusive order of magicians known as the Dogs of Odysseus also show up with Robin in their sights.

Robin must handle these new threats on top of the menace from the Lazenbury coven, but a secret about Robin's past may throw all of her plans into jeopardy.


Praise For I Come with Knives: Malus Domestica #2…

S. A. HUNT (she/her) is the author of the Malus Domestica horror-action series from Tor Books, which begins with Burn the Dark. In 2014, she won Reddit's /r/Fantasy "Independent Novel of the Year" Stabby Award for her Outlaw King fantasy gunslinger series. She is an Afghanistan veteran (OEF 2010), a coffee enthusiast, a fervent bicyclist, and she currently lives in Petoskey, Michigan.
Loading...
or support indie stores by buying on