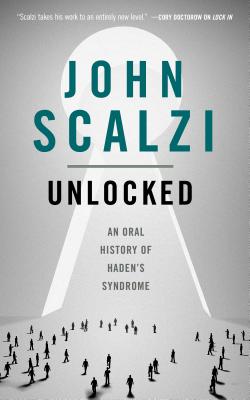 An Oral History of Haden's Syndrome (The Lock In Series #3)

Discover the history of Haden's Syndrome, the virus that created the world of John Scalzi's inventive near-future thrillers Lock In and Head On, in the prequel novella Unlocked.

Not long from now, a virus will sweep the globe. Most will suffer no worse than flu-like symptoms, but an unlucky one percent will be changed forever. Hundreds of millions become "locked in", awake, aware, but completely unable to control their bodies.

This is the story of the doctors, scientists, engineers, politicians, and heroes who remade the world. It is the story of the chaotic outbreak, the fight for a cure, the changes that followed. It is an oral history, straight from the mouths of those who survived the most dynamic period in human history.


Praise For Unlocked: An Oral History of Haden's Syndrome (The Lock In Series #3)…