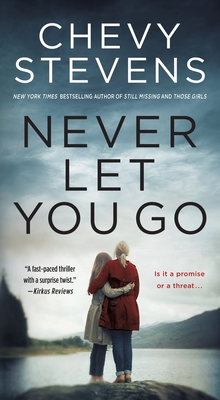 In Never Let You Go, Chevy Stevens delivers a chilling, twisting thriller that crackles with suspense as it explores the darkest heart of love and obsession.


Praise For Never Let You Go: A Novel…

Praise for Never Let You Go:

"A fast-paced thriller with a surprise twist." —Kirkus Reviews

"The gripping, often terrifying story follows Lindsey as she endures the roller coaster that is survival and in the end finds an outcome that she never expected... Stevens’ portrayal is spot-on." —Booklist

"Will have you spellbound." —Karin Slaughter

“An emotional rollercoaster you’ll be sorry to get off of when you finish the last page.” –Jennifer McMahon

Chevy Stevens is the author of Still Missing and Never Knowing. Before becoming a writer, she worked as a realtor. When she held open houses, she had a lot of time waiting by herself between potential buyers, and Stevens would spend this time scaring herself with all the things that could happen to her. The most terrifying scenario she thought up became the story behind Still Missing. Stevens grew up on a ranch on Vancouver Island, and she still calls the island home. When she’s not writing, she’s hiking with her husband and her dog in the local mountains.
Loading...
or support indie stores by buying on
(This book is on backorder)