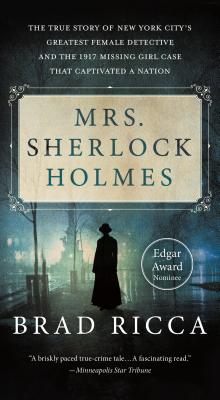 Grace Humiston was a lawyer, a detective, and the first female U.S. District Attorney. She was also a society woman who would become one of the greatest crime-fighters in America. This is her story.

In 1917, on the day before Valentine’s Day, a beloved teenager named Ruth Cruger went missing. When the police gave up on trying to find her, Grace took it upon herself to get the job done—even if that meant navigating a dangerous underworld of secrets and lies, two-faced cops, and a mysterious pale man in a desperate race against time to bring Ruth home.

Grace’s motto—justice for those of limited means—led her to investigate some of history’s most notorious cases, in New York City and across the globe. Mrs. Sherlock Holmes is the first-ever narrative biography of this singular woman the press nicknamed after fiction’s greatest detective.

“Her incredible life story, superbly portrayed by Ricca, is more proof that truth is stranger than fiction.”—Publishers Weekly