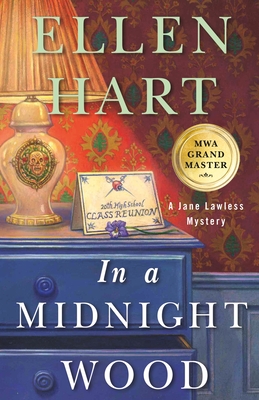 In a Midnight Wood

Minnesota private investigator Jane Lawless is headed on a little getaway. She and her best friend, Cordelia Thorn, plan to visit their old friend Emma in her hometown of Castle Lake, while also participating in the small town's local art festival. Between the festival and an upcoming high school reunion for the class of 1999, no one in Castle Lake is quite sure who will make an appearance.

But back in 1999, Emma's boyfriend and Castle Lake high school senior Sam Romilly went missing. Everyone thought he ran away, though the town rumor mill has always claimed his father murdered him. Today, within a week of his class's 20th reunion, Sam’s remains are found in someone else's burial plot. Suddenly the case is warming up fast. People who knew Sam—friends and enemies alike—will be in town for the much anticipated reunion. It’s up to Jane to sort the innocent from the guilty, before it's too late.

“[E]legantly plotted . . . Hart builds tension by alternating chapters focused on Jane and friends in the present with those showing Sam and his schoolmates in 1999. Each new glimpse of the past alters readers’ understanding of the present. This complex mystery will satisfy newcomers and longtime fans alike.” —Publishers Weekly


Praise for Ellen Hart and The Jane Lawless Series

“Hart, the veteran crime writer, presents her central character, Jane Lawless, with such consistent and off-handed good humour that readers hardly notice the trails she and her character have blazed.” — The Toronto Star

“This intricately plotted mystery is filled with a cast of lying characters . . . it's obvious why Mystery Writers of America named her a Grand Master.” — Library Journal on Twisted at the Root

“Hart uses the characters introduced in this installment of her long-running series to ramp up the creepiness.” —Kirkus Reviews on Twisted at the Root