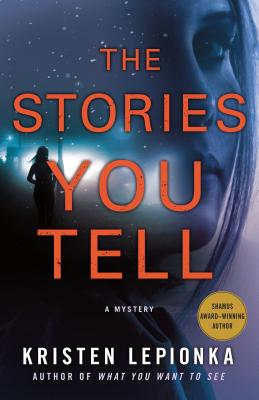 The Stories You Tell

"Lepionka is setting a high standard for crime fiction." —Booklist (starred review) on What You Want to See

The Stories You Tell is Shamus Award-winning and Anthony and Macavity Award-nominated author Kristen Lepionka’s heart-pounding third novel that will keep readers on the edge of their seats with her signature twists and mile-high stakes.

A late-night phone call is never good news, especially when you’re Roxane Weary. This one is from her brother Andrew, whose evening was interrupted by an urgent visit from Addison, a hip young DJ and one-time fling, who turns up at his apartment scared and begging to use his phone. She leaves as quickly as she appeared, but now Andrew is worried—especially when Addison never makes it home and her friends and family demand to know where she is. As the police begin to suspect that something may have happened to her, and that Andrew is involved, Roxane tracks Addison’s digital footprint as she goes deeper and deeper into the events preceding her disappearance. Meanwhile, a cop is found dead on the opposite side of town, leading to a swirl of questions surrounding a dance club whose staff—which includes Addison—has suddenly gone AWOL. As Roxane struggles to distinguish the truth from the stories people tell about themselves online, it's clear that the mystery of Addison's whereabouts is just the beginning.


Praise For The Stories You Tell: A Mystery (Roxane Weary #3)…

"Building to a chilling and surprising conclusion, the third book in Lepionka's Shamus-Award-winning series is both intricately plotted and character-driven, with a complicated protagonist."—Library Journal

“With Kristen Lepionka’s The Stories You Tell, an already-great series takes a major leap forward - and readers should rejoice. In Roxane Weary, Lepionka has created an unforgettable, deeply flawed hero that nods to the past but blazes a wholly unique trail. The Stories You Tell is brimming with surprises and a mystery that’s both stealthy and menacing. Lepionka is a pro." —Alex Segura, author of Dangerous Ends and Blackout

"Lepionka's keen eye for integrating national news and technology into her developing characters' plotlines produces a story that's timely in more ways than one." —Kirkus Reviews

KRISTEN LEPIONKA is the Shamus Award-winning and Anthony and Mcavity Award-nominated author of The Last Place You Look and What You Want to See. She grew up mostly in her local public library, where she could be found with a big stack of adult mysteries before she was out of middle school. She is a co-founder of the feminist podcast Unlikeable Female Characters, and she lives in Columbus, Ohio, with her partner and two cats.
Loading...
or
Not Currently Available for Direct Purchase