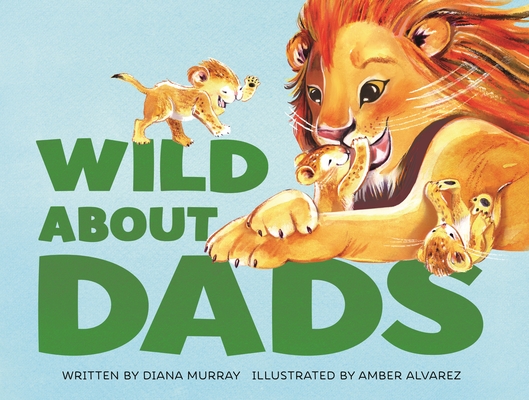 See lions snuggle on the savanna and groundhogs play on the prairie in Diana Murray's Wild About Dads, a heartwarming picture book that celebrates dads of all kinds—featuring illustrations by Amber Alvarez!

Dads can help you reach up high,
and help to keep you warm and dry.
Dads are strong, dads are brave,
but sometimes dads could use a shave.

Everyone loves dads—humans, lions, frogs, prairie dogs, and even pelicans! See all these animals snuggle their little ones in this sweet, rhyming picture book that celebrates fatherhood in its many forms.

Perfect for Father’s Day and showing dads how much they mean to you every day of the year.


Praise For Wild About Dads…

"This heartwarming story depicts dads in the animal kingdom...Suitable for read-alouds and a solid choice for Father’s Day." -- School Library Journal

"A fascinating look at dads in the animal world." -- Kirkus

"Murray makes it clear that many fathers, animal and human alike, are capable caretakers. Back matter lists dad facts about each species referenced." -- Publishers Weekly

Amber Alvarez grew up on the North Shore of Oahu, Hawaii, in a family of artists, makers, and comedians. Her dad taught her how to draw. She has her BFA from Pratt Insitute in Brooklyn, New York. Her illustrations happen in her art studio in Utah, where she lives with her husband and their wild bulldog puppy, Winston. Amber illustrated the picture book, Wild About Dads.
Loading...
or support indie stores by buying on