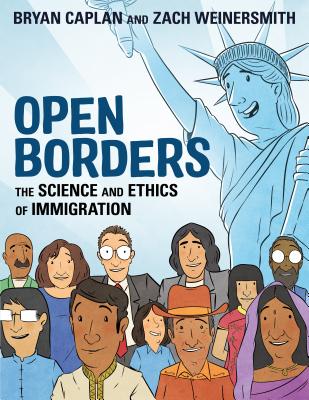 The Science and Ethics of Immigration

An Economist “Our Books of the Year” Selection

American policy-makers have long been locked in a heated battle over whether, how many, and what kind of immigrants to allow to live and work in the country. Those in favor of welcoming more immigrants often cite humanitarian reasons, while those in favor of more restrictive laws argue the need to protect native citizens.

But economist Bryan Caplan adds a new, compelling perspective to the immigration debate: He argues that opening all borders could eliminate absolute poverty worldwide and usher in a booming worldwide economy—greatly benefiting humanity.

With a clear and conversational tone, exhaustive research, and vibrant illustrations by Zach Weinersmith, Open Borders makes the case for unrestricted immigration easy to follow and hard to deny.


Praise For Open Borders: The Science and Ethics of Immigration…

"Highly recommended—the most powerful an economic and moral argument on a fundamental issue I have ever read in graphic novel format and up there in any format."—Jason Furman

"A delightful tour of the arguments and evidence behind the debate [around open borders]... What’s refreshing about the way that Caplan responds to the likely criticisms of his thesis is that he’s thoughtful and generous. Nobody is accused or racism or some other less-than-pure motivation." —Bloomberg Opinion

"A highly effective way to talk about an issue that remains a nonstarter for so many nationwide." —Kirkus

“A phenomenal achievement. [Open Borders] is a landmark in economic education, how to present economic ideas, and the integration of economic analysis and graphic visuals. I picked it up not knowing what to expect, and was blown away by the execution . . . This book is one of the very best explainers of the gains from trade idea ever produced, and it will teach virtually anyone a truly significant amount about the immigration issue, as well as economic analytics more generally.” —Tyler Cowen, Marginal Revolution

“An easy-to-read contrarian take from an economist who is right about most everything.” —John Stossel

“A welcome counterpoint to the rampant fear-mongering that all too often dominates airwaves and political campaigns.” —Paste Magazine

“A compelling contribution to the debate over one of the most significant issues of our time.” —Reason

“Just like John Stuart Mill’s The Subjection of Women 150 years ago, this book advances a sustained argument so compelling that it just might shift the moral foundations of the world.” —Scott Aaronson, University of Texas at Austin

“A tour de force graphic novel illustrating one fundamental truth: there’s nothing more American than being an immigrant.” —Jeff Atwood, cofounder of Stack Overflow and Discourse.org

“Caplan and Weinersmith have pioneered a new format: a comic book that's quantitative and informative while remaining thoroughly entertaining. Whether you support more migration or not, Open Borders will quickly give you a balanced understanding of what serious research has to say about how open borders would affect America.” —Robert Wiblin, director of research, 80,000 Hours

Bryan Caplan is a Professor of Economics at George Mason University and one of the world’s leading advocates of free migration. He is the author of The Myth of the Rational Voter, named "the best political book of the year" by the New York Times; Selfish Reasons to Have More Kids and The Case Against Education; and is a blogger for EconLog. He has been published in the New York Times, Washington Post, Wall Street Journal, The Atlantic, American Economic Review, Economic Journal, Journal of Law and Economics, and Intelligence, and appeared on ABC, Fox News, MSNBC, and C-SPAN. An openly nerdy man who loves role-playing games and graphic novels, he’s live in Oakton, Virginia, with his wife and four kids.

Zach Weinersmith is the creator of the popular webcomic SMBC, the creator of the nerd comedy show BAHFest, and the co-author of the New York Times bestselling popular science book, Soonish. He is the artist of First Second's Open Borders and the writer of Bea Wolf, a modern comedic retelling of the classic Beowulf epic.
Loading...
or support indie stores by buying on