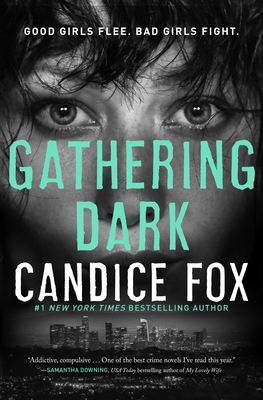 A convicted killer. A gifted thief. A vicious ganglord. A disillusioned cop. Together they’re a missing girl’s only hope.

Dr. Blair Harbour, once a wealthy, respected pediatric surgeon, is now an ex-con down on her luck. She’s determined to keep her nose clean and win back custody of her son. But when her former cellmate begs for help to find her missing daughter, Blair is compelled to put her new-found freedom on the line.

Detective Jessica Sanchez has always had a difficult relationship with the LAPD. And her inheritance of a multi-million dollar mansion as a reward for catching a killer has just made her police enemy number one.

It’s been ten years since Jessica arrested Blair for cold-blooded murder. So when Jessica opens the door to the disgraced doctor late one night she expects abuse, maybe even violence. What comes next is a plea for help…

“Candice Fox has written an addictive, compulsive novel that’s not just about a missing girl, it’s about the power of redemption and forgiveness. One of the best crime novels I’ve read this year.” —Samantha Downing, USA Today bestselling author of My Lovely Wife and He Started It

"A fantastic standalone psychological thriller with compelling characters and an edge of seat ending from Candice Fox--one of our brightest crime fiction stars."--Adrian McKinty, New York Times bestselling author of The Chain

“A prolific storyteller with a great touch for offbeat, memorable crime fiction characters…Fox delivers a strong sense of humanity as the at-times helter-skelter action unfolds. Gathering Dark is an alluring read."—Mystery Scene

“If you haven't read Candice Fox yet, you're missing out! I can't wait to read what this talented writer does next!” —Chevy Stevens

1. The story starts off in a heated moment: the store Blair works at gets robbed. If you were Blair, how would you handle the situation? Would you do the same as her or would you call the police? Why or why not?

2. Jessica is given the life-changing gift of a multi-million dollar home for her tireless work on a murder case gone cold. Yet, she’s against the idea of accepting because the jealousy of her fellow police officers is too much to bear and it jeopardizes her career. But do you think there are deeper reasons as to why Jessica is so opposed to taking ownership of the house? If so, what are those reasons?

3. When Blair needs someone to talk to, she resorts to dialing random numbers and striking up conversation with whoever answers. Why does she find comfort from talking to strangers? What do you think she gains from this? Is there a connection that can be drawn between her desire to talk to strangers and the way she feels like a stranger to her own child?

4. Jessica struggles with being abandoned—by her partner in her time of need and by her colleagues at the station—and this abandonment is made increasingly difficult because she views the police as her family. Where do her struggles with abandonment stem from? Why is it so important for her to be part of this fabricated familial unit?

5. Ada explains to Blair how she witnessed Dayly saving a baby pigeon on the side of a highway. It was small, alone, bleeding, hungry, and dehydrated. Aside from her love for animals, why do you think Dayly was so compelled to save this pigeon? Do you think that the wounded baby bird is a metaphor?

7. Prior to going missing, Dayly was straight-laced and didn’t get into trouble. But then she decides to communicate with her father—a convict on death row for mass murder. Why do you feel she’s drawn to have a relationship with him? Does this seem out of character for her? What do you think her ulterior motive is?

8. Blair is in a tough position with Ada, even as she aids their cause. While Jessica is against Ada helping because she feels Ada is only in it for money, Blair has faith that Ada is helping out because she owes her for when Blair saved the life of her family member back when they were in prison. Would you trust Ada in this situation? Why or why not? Do you think she’s just in it for the money or because she’s repaying her debt to Blair?

9. Blair relies on Jessica to be her inside contact with the police and to help her and Sneak find Dayly. But Jessica is the one who put Blair behind bars for an act she claims was done in self-defense. If Jessica was wrong about Blair’s own case, why does Blair think Jessica will be a reliable source in this investigation? Is it simply out of desperation or something more?

10. Blair often notes how following Sneak’s siren call and investigating the whereabouts of Dayly is dangerous enough to get everything taken away from her all over again. She refers to it as “the fall” and “the backwards plunge;” moments in which she edges close enough to danger that she can visualize her life and her freedom slipping away from her. Why do you think Blair is inexplicably drawn to this kind of danger? Do you think she fears losing Jamie for good? If so, why does she still risk helping Sneak even if it means she could lose what’s most important to her?