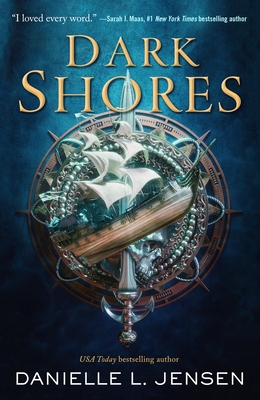 “Richly-woven, evocative, and absolutely impossible to put down?I was hooked from the first lines! Dark Shores has everything I look for in a fantasy novel: fresh, unique settings, a cast of complex and diverse characters, and an unflinching boldness with the nuanced world-building. I loved every word.”?Sarah J. Maas, #1 New York Times bestselling author


A SAILOR WITH A WILL OF IRON
Teriana is the second mate of the Quincense and heir to the Maarin Triumvirate. Her people are born of the seas and the keepers of its secrets, but when her closest friend is forced into an unwanted betrothal, Teriana breaks her people’s mandate so her friend might escape—a choice with devastating consequences.

"This epic first installment in a new series from Jensen (The Malediction Trilogy) features stunning worldbuilding, a vivid cast of secondary characters, and a steamy slow-burn romance between two exceedingly competent and compelling heroes. Dark Shores is not one to miss."—Booklist