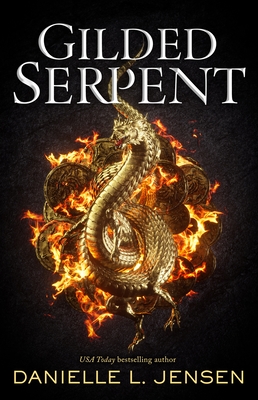 From bestselling author Danielle L. Jensen comes a thrilling new novel in the Dark Shores world, a series that Sarah J. Maas called "everything I look for in a fantasy novel."

THEIR BATTLES ENDED IN VICTORY

Lydia returns to Mudaire to enter training at the healing temple. But instead of fighting to save lives, she’s convinced she is doing more harm than good. She delves into the history of the gods only to discover a truth that will change her life forever.

His birthright as commander of the Royal Army is finally in his grasp, but Killian feels anything but victorious. Burdened by his past, he embraces the darker side of his mark—and in doing so, risks starting a war.

BUT THE WAR HAS ONLY JUST BEGUN

Having defeated the tyrant Urcon, Marcus struggles to form a lasting alliance with the Arinoquians. But he is plagued by the knowledge that there is a traitor among his friends, and it could cost him everything that he’s fought for.

Torn between her growing allegiance to the Thirty-Seventh legion and her need to liberate her people, Teriana finds herself mired in a web of secrets. She embarks upon a path that will either save everyone she loves—or put them all in their graves.

“This is a lush, imaginative world, and as the focus shifts between Teriana and Marcus, it becomes clear that the readers are only getting a glimpse of its complicated history and mythology. [F]ans of Rutkoski’s sighworthy The Winner’s Kiss and the high-stakes sea adventure of Levenseller’s Daughter of the Pirate King will want to know where Marcus and Teriana journey to next.”—Bulletin of the Center for Children’s Books

“The plot’s twists and turns and fantastical elements add to the allure of this thrilling story. Exhilarating fantasy-adventure romance for fans of Tricia Levenseller's Daughter of the Pirate King, Alexandra Christo's To Kill a Kingdom, or Natalie C. Parker's Seafire. Readers will eagerly await the next book in the series.”—School Library Journal