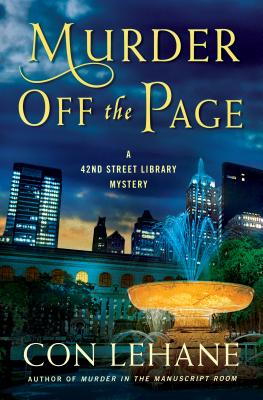 Murder Off the Page

The third book in an amazing series that features crime à la library at America's most famous institution of higher reading.

A note from bartender Brian McNulty, Raymond Ambler’s friend, confidant, and sometimes adviser, sets the librarian sleuth off on a murder investigation, one that he pursues reluctantly until a second murder upends the world as he knows it. The second victim is a lady friend of McNulty’s—and the prime suspect is McNulty himself.

As Ambler pursues his investigation, he discovers that the murdered woman had a double life. Her intermittent visits to the city—a whirlwind of reckless drinking and illicit liaisons with men she met in the cocktail lounges—had their counterpart in suburban Fairfield County Connecticut where, as Dr. Sandra Dean, she practiced dermatology and lived in a gated community with a doting husband and a young daughter.

Yet, no matter which way he turns, McNulty emerges as a suspect. Ambler’s dilemma seems insurmountable: Should he keep searching for the truth behind the murders if the deeper he probes, the more evidence he finds that points to the morally rumpled bartender as a murderer?

"... fans and new readers will enjoy solving Ambler's latest puzzle along with him. An apt choice for bibliophiles and those who like a New York City setting." - Booklist

"Those who love New York City and libraries will be rewarded." - Publishers Weekly

"This is the perfect series for bibliophiles and those who like their murder mysteries with a hard-boiled edge." - CrimeReads

"Con Lehane gives mystery lovers plenty to chew on in his entertaining and good-natured series, including plot twists, engaging characters with complicated nuance, [and] just a hint of romance." - Hill Rag Magazine

Con Lehane is a mystery writer, living outside Washington, DC. Murder at the 42nd Street Library is the first in his series featuring Raymond Ambler, curator of the 42nd Street Library’s (fictional) crime fiction collection. He's also the author of the novels featuring New York City bartender Brian McNulty. Over the years, he (Lehane, that is) has been a college professor, union organizer, labor journalist, and has tended bar at two-dozen or so drinking establishments. He teaches fiction writing and mystery writing at The Writer’s Center in Bethesda, Maryland.
Loading...
or
Not Currently Available for Direct Purchase