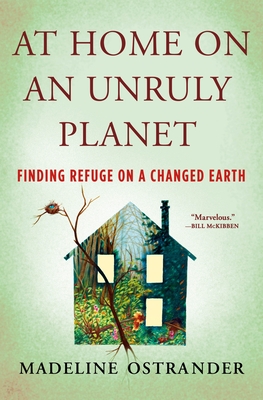 At Home on an Unruly Planet

Finding Refuge on a Changed Earth

From rural Alaska to coastal Florida, a vivid account of Americans working to protect the places they call home in an era of climate crisis

How do we find a sense of home and rootedness in a time of unprecedented upheaval? What happens when the seasons and rhythms in which we have built our lives go off-kilter?

Once a distant forecast, climate change is now reaching into the familiar, threatening our basic safety and forcing us to reexamine who we are and how we live. In At Home on an Unruly Planet, science journalist Madeline Ostrander reflects on this crisis not as an abstract scientific or political problem but as a palpable force that is now affecting all of us at home. She offers vivid accounts of people fighting to protect places they love from increasingly dangerous circumstances. A firefighter works to rebuild her town after catastrophic western wildfires. A Florida preservationist strives to protect one of North America's most historic cities from rising seas. An urban farmer struggles to transform a California city plagued by fossil fuel disasters. An Alaskan community heads for higher ground as its land erodes.

Ostrander pairs deeply reported stories of hard-won optimism with lyrical essays on the strengths we need in an era of crisis. The book is required reading for anyone who wants to make a home in the twenty-first century.


Praise For At Home on an Unruly Planet: Finding Refuge on a Changed Earth…

Praise for At Home on an Unruly Planet

“What does it mean to maintain a sense of place in an age of climate change? In At Home on an Unruly Planet, Madeline Ostrander explores this question with searching intelligence and uncommon empathy.”
—Elizabeth Kolbert, New York Times bestselling author of The Sixth Extinction

“Home may be the most pungent word in the language—and it’s no longer something any of us can take for granted, as a rapidly changing planet mocks our ideas of permanence and stability. As Madeline Ostrander makes clear in this marvelous book, resilience is a new watchword: we’re going to have to be light on our feet, even as we plant them in home ground!”
—Bill McKibben, New York Times bestselling author of The Flag, the Cross, and the Station Wagon: A Graying American Looks Back at His Suburban Boyhood and Wonders What the Hell Happened

“Ostrander visits with communities on the front lines of climate change and comes away with stories of hope, hardship, and resilience. Her book reminds us that home isn’t a place so much as a process: a radical act of continuous creation and renewal.”
—Jessica Bruder, New York Times bestselling author of Nomadland: Surviving America in the Twenty-First Century

“With deep, compassionate reporting and elegant prose, Madeline Ostrander takes us into the lives of those rebuilding communities in the wake of climate disasters. Amid the devastation and loss, she finds creativity, vital hope, and a sense of home that outlasts any address.”
—Michelle Nijhuis, author of Beloved Beasts: Fighting for Life in an Age of Extinction

“In this beautiful, troubling, deeply compassionate book, Madeline Ostrander explores our home planet in this moment of climate-driven fire and flood, and asks one of the most important questions of our time. How do we define a home when it is changing under our feet? What she finds makes At Home on an Unruly Planet a don’t-miss book.”
—Deborah Blum, Pulitzer-prize-winning author of The Poisoner’s Handbook: Murder and the Birth of Forensic Medicine in Jazz-Age New York

“The braided stories in this book bring it home to us—we are already in the climate emergency, and seldom is it made clearer than here that it is a polycrisis, hitting us on many fronts and levels in ways that won’t be going away. What’s encouraging is the strength, cleverness, and resiliency of the people who fill these pages, coping with new situations that won’t be going away. Above all, this is a hopeful book, and an encouragement to act.”
—Kim Stanley Robinson, New York Times bestselling author of The Ministry for the Future

“As each new climate calamity obliterates, incinerates, or engulfs entire communities, we shudder to think our own could be next. Gently but purposefully, Ostrander guides us into places that have known this nightmare, not to shock but to show that the meaning of home is so powerful that people will make surprising, imaginative, even transcendent leaps to hold on to theirs. By her book’s end, you realize that maybe you could, too.”
—Alan Weisman, author of The World Without Us and Countdown

“A gripping and sometimes raw look at the personal costs of climate change, this book places our everyday experiences of home in the context of decades of environmental movements and eons of geologic time. Heartbreaking, but also funny and hopeful—you won’t want to put it down, and you won’t be able to forget it.”
—Annalee Newitz, author of Four Lost Cities: A Secret History of the Urban Age

“From fires to floods to sea-level rise, Ostrander exposes readers to the serious impacts of climate change through the eyes of ordinary Americans. Meet Susan, Glenn, Jenny, and Lisa—all of their stories underscore the impact of global change on our homes. This book is a must-read for assessing the future of life on Earth.”
—Meg Lowman, author of The Arbornaut: A Life Discovering the Eighth Continent in the Trees Above Us

“A hopeful, urgent, and universal message about our collective ability to face the climate changes we can no longer ignore.”
—Kirkus Reviews (starred review)

Madeline Ostrander is a science journalist and writer whose work has appeared in the NewYorker.com, The Nation, Sierra magazine, PBS's NOVA Next, Slate, and numerous other outlets. Her reporting on climate change and environmental justice has taken her to locations such as the Alaskan Arctic and the Australian outback. She's received grants, fellowships, and residencies from the Alfred P. Sloan Foundation, Artist Trust, the USC Annenberg Center for Health Journalism, the Fund for Investigative Journalism, the Jack Straw Cultural Center, the Mesa Refuge, Hedgebrook, and Edith Cowan University in Australia. She is the former senior editor of YES! magazine and holds a master's degree in environmental science from the University of Wisconsin–Madison. She lives in Seattle with her husband.
Loading...
or support indie stores by buying on