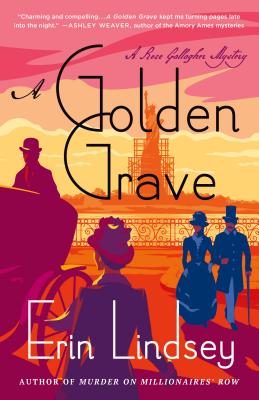 Rose Gallagher always dreamed of finding adventure, so her new life as a freshly-minted Pinkerton agent ought to be everything she ever wanted. Only a few months ago, she was just another poor Irish housemaid from Five Points; now, she’s learning to shoot a gun and dance the waltz and throw a grown man over her shoulder. Better still, she’s been recruited to the special branch, an elite unit dedicated to cases of a paranormal nature, and that means spending her days alongside the dashing Thomas Wiltshire.

But being a Pinkerton isn’t quite what Rose imagined, and not everyone welcomes her into the fold. Meanwhile, her old friends aren’t sure what to make of the new Rose, and even Thomas seems to be having second thoughts about his junior partner. So when a chilling new case arrives on Rose’s doorstep, she jumps at the chance to prove herself – only to realize that the stakes are higher than she could have imagined. Six delegates have been murdered at a local political convention, and the police have no idea who–or what–is responsible. One thing seems clear: The killer’s next target is a candidate for New York City mayor, one Theodore Roosevelt.

Convinced that something supernatural is afoot, Rose and Thomas must track down the murderer before Roosevelt is taken out of the race–permanently. But this killer is unlike any they’ve faced before, and hunting him down will take them from brownstones to ballrooms to Bowery saloons. Not quite comfortable anywhere, Rose must come to terms with her own changed place in society–and the fact that some would do anything to see her gone from it entirely.


Praise For A Golden Grave: A Rose Gallagher Mystery…

"Rollicking. Readers will relate to Rose as she struggles to acclimate to her new station in life. Fans of paranormal historicals will be well satisfied." - Publishers Weekly

"Wonderful characters and intricately described class divides of the time. For fans of the previous book and of Amanda Allen's Santa Fe Revival mysteries." - Booklist

"If Amy Stewart's adventures featuring Miss Kopp married an episode of TV's Murdoch Mysteries, it would become this book's blend of mysticism and mystery." - Library Journal

"Clever and spunky sleuth Rose Gallagher encounters a paranormal mystery with a fascinating cast of characters in this charming and compelling novel. A deft and delightful blend of history, mystery, and the supernatural, A Golden Grave kept me turning pages late into the night, and I will happily follow Rose on future adventures!" - Ashley Weaver, author of the Amory Ames Mysteries

"A lively, entertaining book, with an interesting background and use of history, and a vigorous and determined heroine." - Genevieve Cogman, author of the Invisible Library series

"A Golden Grave is an intriguing mystery that combines historical and paranormal elements seamlessly. Rose’s journey as she tries to navigate her new world, while remaining faithful to the old, is charming. I thoroughly enjoyed this book!" - Alex Erickson, author of the Bookstore Cafe Mysteries

ERIN LINDSEY has lived and worked in dozens of countries around the world, but has only ever called two places home: her native city of Calgary and her adopted hometown of New York. In addition to the Rose Gallagher mysteries, she is the author of the Bloodbound series of fantasy novels from Ace. She divides her time between Calgary and Brooklyn with her husband and a pair of half-domesticated cats.
Loading...
or support indie stores by buying on