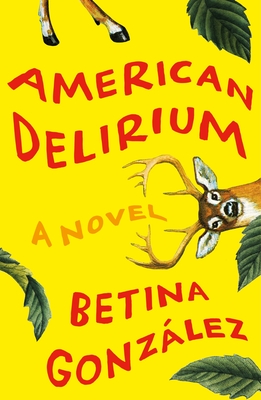 From award-winning novelist Argentine Betina González, American Delirium is a dizzying, luminous English-language debut about an American town overrun by a mysterious hallucinogen and the collision of three unexpected characters through the mayhem.

In a small Midwestern city, the deer population starts attacking people. So Beryl, a feisty senior and ex-hippie with a troubled past, decides to take matters into her own hands, training a squad of fellow retirees to hunt the animals down and to prove to society they’re capable of more than playing bingo.

At the same time, a group of protesters decides to abandon the “system” and live in the woods, leaving behind the demands of modern life—including their children. Nine-year-old Berenice never thought her mother would join the dropouts, but she’s been gone for several days, leaving only a few clues about her past for Berenice to piece together.

Vik, a taxidermist at the natural history museum and an immigrant from the Caribbean, is beginning to see the connections among the dropouts, the deer, and the discord. He’s not normally the type to speak up, but when he finds a woman living in his closet, he’s forced to get involved. Each of these engrossing characters holds a key to the city’s unraveling—despite living on the margins of society—and just as their lives start to spin out of control, they rescue one another in surprising ways.


Praise For American Delirium: A Novel…

“With alternately sharp and florid prose [American Delirium] tells the story of a city in decay. . . . The genre here is magical realism, but González punctures the reveries with moments of acuity. . . . Utterly transportive—the rare, giddy book that makes the familiar seem fantastical, and vice versa.”
—The Atlantic

"Unsettling, fantastical, and often hilarious . . . [Like] listening to a symphony."
—The Boston Globe

"A commentary on aging, sex, and the emptiness of modern living in the U.S. that could've only been written by an outside observer."
—NPR

“This has the makings of a zany psychedelic romp, but instead the delirium is marvelously controlled and administered in doses just potent enough to ease patient readers into this off-kilter world. González’s distorted utopian vision is a memorable trip.” ­
—Publishers Weekly (starred review)

"A novel about the fictions—those myths about age, race, family, nationality, sexuality, health—that we tell ourselves. . . . Both zany and profound."
—Kirkus Reviews (starred review)

"A profound and much-needed tale full of hope and kindness."
—Booklist (starred review)

"With piercing insight and prose that evokes the literary flair of César Aira, American Delirium is a surreal exploration of environmental imbalance."
—Lit Hub

"Fast-paced . . . An ode to taxidermy and botany, a meditation on aging, a tongue-in-cheek look at how we romanticize the wilderness, and, as the title suggests, a reflection on the delusions of modern life."
—Outside

"A wild romp. . . . The lively pace and absurdity of American Delirium could easily go off the rails, but González keeps a tight control over each of her characters."
—BookPage

"Betina Gonzalez writes with tremendous verve. What a sharp, audacious novel about the escalating delirium of our current era. Heather Cleary's translation recreates the quicksilver scenes of American Delirium with superb artistry."
—Idra Novey, author of Those Who Knew

“This is a beautiful and ruthless novel that asks readers to dive into it with their whole selves, to see themselves in its violence and its flickers of hope. It is, like few are, a book that will stay with you long after you’ve finished it.”
—Yuri Herrera, author of Signs Preceding the End of the World, winner of the 2016 Best Translated Book Award

“Betina Gonzalez has created a gorgeous novel where the real and the mystical walk hand in hand, and occasionally give each other a sharp jab. The book's interwoven storylines delve not only into the world of botanical psychedelics, but into the psychedelia of ordinary life—the surrealism of aging, the hallucinatory nature of desire, the hauntings of love and loneliness and death. As Gonzalez’s characters navigate a world where plants inspire revolution and animals are possessed by homicidal rage, they ask us to consider whether human beings are perhaps the least natural creatures this planet has to offer.”
—Anjali Sachdeva, author of All the Names They Used for God

“American Delirium traces an illuminating journey into the uncanny core of contemporary society. A bold, smart, atmospheric exploration of the unsettling reality that lies beneath our false sense of comfort.”
—Carlos Fonseca, author of Natural History

“With [González's] capacity to inform, her sense of analysis, of proportion, of measure, of the balance of something so complex as a novel, I predict a bright future for her.”
—Nobel laureate José Saramago

“Strange and surreal, bewitching but understated, American Delirium captures the uncanny in the everyday, a cryptic glimpse at society and our boundless contradictions. From runaway parents to attacking deer, Betina González's English-language debut is remarkable. Beautifully translated by Heather Cleary and perfect for fans of vibrant and daring writers like César Aira and Roque Larraquy.”
—Mark Haber, bookseller at Brazos Bookstore (Houston) and author of Reinhardt's Garden

Heather Cleary is an Assistant Professor of Spanish at Sarah Lawrence College, USA. Her research on contemporary Latin American culture and the theory and practice of translation has appeared in journals including Hispanic Review and Mutatis Mutandis. She has also published seven books in translation, includ two books by Sergio Chejfec, The Dark (2013), which was shortlisted for the National Translation Award, and The Planets(2015), which was a Finalist for the Best Translated Book Award.
Loading...
or
Not Currently Available for Direct Purchase