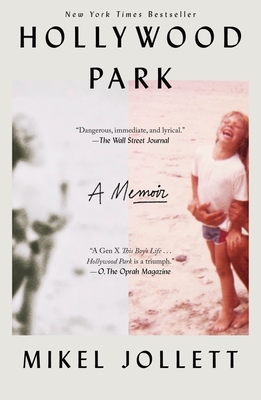 “Hollywood Park is the kind of memoir that will turn you completely inside out before it lets you go. Within the specificity of his story, Mikel Jollett has somehow managed to make space for all of us — the intricate voice of his child and adolescent selves is one every reader will easily hear in their own head. This book is a brilliant and raw balancing of the accounts that make up a self, and I have nothing but respect for the vulnerability it took Jollett to step down from the stage he’s used to occupying as a musician and into a story that readers everywhere will hold in their hands and hearts for a very long time.”
— Afton Montgomery, Tattered Cover Book Store, Denver, CO
View the List

“A Gen-X This Boy’s Life...Music and his fierce brilliance boost Jollett; a visceral urge to leave his background behind propels him to excel... In the end, Jollett shakes off the past to become the captain of his own soul. Hollywood Park is a triumph."
—O, The Oprah Magazine

"This moving and profound memoir is for anyone who loves a good redemption story."
—Good Morning America, 20 Books We're Excited for in 2020

"Several years ago, Jollett began writing Hollywood Park, the gripping and brutally honest memoir of his life. Published in the middle of the pandemic, it has gone on to become one of the summer’s most celebrated books and a New York Times best seller..."
–Los Angeles Magazine

HOLLYWOOD PARK is a remarkable memoir of a tumultuous life. Mikel Jollett was born into one of the country’s most infamous cults, and subjected to a childhood filled with poverty, addiction, and emotional abuse. Yet, ultimately, his is a story of fierce love and family loyalty told in a raw, poetic voice that signals the emergence of a uniquely gifted writer.

We were never young. We were just too afraid of ourselves. No one told us who we were or what we were or where all our parents went. They would arrive like ghosts, visiting us for a morning, an afternoon. They would sit with us or walk around the grounds, to laugh or cry or toss us in the air while we screamed. Then they’d disappear again, for weeks, for months, for years, leaving us alone with our memories and dreams, our questions and confusion. …

So begins Hollywood Park, Mikel Jollett’s remarkable memoir. His story opens in an experimental commune in California, which later morphed into the Church of Synanon, one of the country’s most infamous and dangerous cults. Per the leader’s mandate, all children, including Jollett and his older brother, were separated from their parents when they were six months old, and handed over to the cult’s “School.” After spending years in what was essentially an orphanage, Mikel escaped the cult one morning with his mother and older brother. But in many ways, life outside Synanon was even harder and more erratic.

In his raw, poetic and powerful voice, Jollett portrays a childhood filled with abject poverty, trauma, emotional abuse, delinquency and the lure of drugs and alcohol. Raised by a clinically depressed mother, tormented by his angry older brother, subjected to the unpredictability of troubled step-fathers and longing for contact with his father, a former heroin addict and ex-con, Jollett slowly, often painfully, builds a life that leads him to Stanford University and, eventually, to finding his voice as a writer and musician.

Hollywood Park is told at first through the limited perspective of a child, and then broadens as Jollett begins to understand the world around him. Although Mikel Jollett’s story is filled with heartbreak, it is ultimately an unforgettable portrayal of love at its fiercest and most loyal.


Praise For Hollywood Park: A Memoir…

"A memoir that is dangerous, immediate and lyrical from the jump"
—The Wall Street Journal

“A Gen-X This Boy’s Life...Music and his fierce brilliance boost Jollett; a visceral urge to leave his background behind propels him to excel... In the end, Jollett shakes off the past to become the captain of his own soul. Hollywood Park is a triumph."
—O, The Oprah Magazine

“Jollett’s story serves as a potent reminder that while we cannot change the hand we’re dealt, our freedom lies in what we choose to do with those cards.”
—Adrienne Brodeur, author of Wild Game, THE MILLIONS

"Mikel Jollett, the front man of indie band Airborne Toxic Event, chronicles his tumultuous life. Jollett was born into one of the country’s most infamous cults and subjected to a childhood filled with poverty, addiction and emotional abuse. What comes through the pages is a story of fierce love and family loyalty."
—Good Morning America, 20 Books We're Excited for in 2020

"The frontman of rock band Airborne Toxic Event chronicles, in gorgeous and exacting lyricism, his harrowing coming-of-age within (and eventual escape from) the Church of Synanon, a violent religious cult."
—O, The Oprah Magazine, The 30 Most Anticipated Books of 2020 (so Far)

“Jollett engagingly narrates his story...result[ing] in a shocking but contemplative memoir about the aftermath of an unhealthy upbringing.”
—Publishers Weekly, STARRED REVIEW

"...Engaging and heartbreaking. A good choice for fans of memoirs about overcoming dysfunctional childhoods like Educated and The Glass Castle."
—Booklist

"Mikel Jollett’s gripping memoir starts with a harrowing escape from a cult where he was raised without parents, only to be thrown into a more chaotic world where he’s raised by them. With a childhood defined by neglect, poverty and uncertainty, Jollett’s story serves as a potent reminder that while we cannot change the hand we're dealt, our freedom lies in what we choose to do with those cards. Hollywood Park is an illuminating and redemptive account of one man’s search for meaning, family, and love."
—ADRIENNE BRODEUR, author of Wild Game

"Violent and tender and incandescent, Hollywood Park is as touching as it is shocking. Jollett deftly dissects his struggle to unburden himself of the damage he inherited from his broken family, with insights that are brutally honest and psychologically astute. It tore me apart."
—JANELLE BROWN, New York Times bestselling author of Watch Me Disappear and Pretty Things

“Hollywood Park is amazing. Mikel Jollett takes the shards of a broken childhood – imagine a life where escaping from a violent cult is somehow not a path to safety – and makes it a universal story of the struggle to find connection in a brutally beautiful world. His story zigs where you think it’s going to zag, and even the most irredeemable characters somehow surprise us with their tenacity. It’s a complicated story with a simple payoff: this is how the light gets in, this is how an artist gets made.”
— GLEN DAVID GOLD, author of Carter Beats the Devil

“Hollywood Park is the often heartbreaking, always honest story of a confused boy struggling to make sense of a crazy world. It’s filled with pain, poverty, and violence but also with surprising love, rock and roll, and unexpected triumphs.”
— DARIN STRAUSS, NBCC-winning author of Half a Life

“This is a memoir, but it’s also a song—a lyrical labyrinth that weaves and mesmerizes, all the while proving there’s nothing more dangerous or powerful than a parent’s love. Hollywood Park is a magical debut. Loved it.”
— BRAD MELTZER, #1 New York Times bestselling author of The Escape Artist

“Hollywood Park is full of moving portraits of Jollett’s brother, his father, and his band of contemporaries. To read these pages is to love them right along with him.”
— SEAN WILSEY, author of Oh the Glory of It All

Mikel Jollett is the frontman of the indie band The Airborne Toxic Event. Prior to forming the band, Jollett graduated with honors from Stanford University. He was an on-air columnist for NPR's All Things Considered, an editor-at-large for Men's Health and an editor at Filter magazine. His fiction has been published in McSweeney's.
Loading...
or support indie stores by buying on