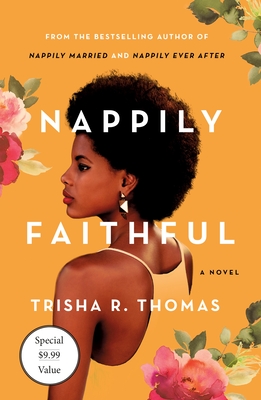 Venus Johnston returns with another misadventure in the joys and pains of love, motherhood and marriage in Trisha R. Thomas's Nappily Faithful, third in the series that began with Nappily Ever After--now a Netflix Original movie starring Sanaa Lathan.

Hoping to get away from emotional baggage in Los Angeles, Venus and Jake move to Atlanta. Yet the constant cloud of the past follows them: a difficult pregnancy and Jake being charged for the murder of his accountant. Though Jake never spent one night in jail, he fears the case will be reopened and he'll once again have to fight for his freedom.

And the timing couldn't be worse since Airic, the biological father of Venus' daughter Mya, suddenly demands parental rights with the child he hasn't seen since her birth. A nasty custody battle ensues. Airic's new wife, Trevelle Doval, a famous TV evangelist--may be behind his sudden interest. Venus is in for the biggest fight of her life.

TRISHA R. THOMAS is the author of Un-Nappily in Love, Nappily in Bloom, Nappily Faithful, Roadrunner, Would I Lie To You, and Nappily Ever After, which was a finalist for the NAACP Image Award for Outstanding Literary Work. Her debut novel was optioned by Halle Berry and Universal Pictures for adaptation to film. Trisha lives in Riverside, California.
Loading...
or support indie stores by buying on