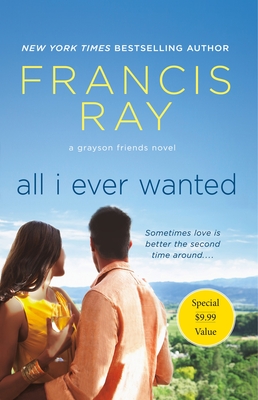 All I Ever Wanted

The next installment in the Grayson Friends series from New York Times bestselling author Francis Ray!

Naomi Reese is a divorced mother with a small daughter named Kayla, a new life in Santa Fe, and, finally, some distance from her abusive ex-husband. All she wants now is a home of her own where she and Kayla can finally feel safe. With one bad marriage behind her, she can't even dream of falling in love again. Until she meets Richard...

A tall, handsome veterinarian with a warm smile and big heart, Richard Youngblood is the kind of man any woman could fall for. Not only does he have a wonderful way with animals, he's great with little Kayla and—Naomi has to admit—he's easy on the eyes. Richard definitely has his sights set on her, too. But first, Naomi has to free herself from her past—and learn how to love again—before she can have all she ever wanted with the man of her dreams...

Francis Ray (1944-2013) is the New York Times bestselling author of the Grayson novels, the Falcon books, the Taggart Brothers, and Twice the Temptation, among many other books. Her novel Incognito was made into a movie aired on BET. A native Texan, she was a graduate of Texas Woman's University and had a degree in nursing. Besides a writer, she was a school nurse practitioner with the Dallas Independent School District. She lived in Dallas. "Francis Ray is, without a doubt, one of the Queens of Romance." --Romance Review
Loading...
or support indie stores by buying on