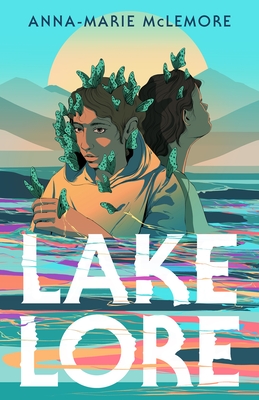 In this young adult novel by award-winning author Anna-Marie McLemore, two non-binary teens are pulled into a magical world under a lake - but can they keep their worlds above water intact?

Everyone who lives near the lake knows the stories about the world underneath it, an ethereal landscape rumored to be half-air, half-water. But Bastián Silvano and Lore Garcia are the only ones who’ve been there. Bastián grew up both above the lake and in the otherworldly space beneath it. Lore’s only seen the world under the lake once, but that one encounter changed their life and their fate.

Then the lines between air and water begin to blur. The world under the lake drifts above the surface. If Bastián and Lore don’t want it bringing their secrets to the surface with it, they have to stop it, and to do that, they have to work together. There’s just one problem: Bastián and Lore haven’t spoken in seven years, and working together means trusting each other with the very things they’re trying to hide.

"An astonishingly beautiful love letter to neurodivergent and nonbinary teens cast amid a magical lake setting that will pull you in right along with the characters." —Booklist, starred review

"In this sumptuous tale of magical realism told via alternating perspectives, McLemore holds up realities of being neurodivergent while otherwise marginalized alongside strong friendships and vital family relationships that ground the protagonists." —Publishers Weekly, starred review

"McLemore successfully binds the novel’s fantasy elements to the inner lives of their characters... Readers...will find relief and recognition in this impassioned book, and teens in general should feel welcomed by its warmly open storytelling." —Horn Book Magazine

"An absolute knockout. McLemore has created a jar full of glitter that I wish I could read again for the first time...One of the most important pieces of queer fiction I've ever had the pleasure to read."
—TJ Klune, New York Times-bestselling author of The House on the Cerulean Sea

Praise for The Mirror Season:

"An empowering story of two survivors healing together... Their vulnerable, spellbinding story, colored with magic realism and achingly beautiful prose, is about healing after trauma, reclaiming your body and choices, and the empathetic understanding between survivors." —Booklist, starred review

"McLemore whips up a magical realist tale as spellbinding as the pan dulce creations described within this novel’s pages... With haunting prose and sharp insight, McLemore expertly combines the piquant with the sweet." —Publishers Weekly, starred review

"The poetic and vulnerable prose illuminates the need for more open conversation about sexuality, consent, and abuse without the limits of the gender binary...Piercing magic." —Kirkus Reviews, starred review

"An unforgettable story of trauma and healing, told in achingly beautiful prose with great tenderness and care." —Karen M. McManus, #1 New York Times-bestselling author of One of Us Is Lying

"A powerful, harrowing, and important story about trauma, identity, taking back power and the redemptive nature of healing. These characters will stay with me forever. An absolute must read." —Aisha Saeed, New York Times-bestselling author of Amal Unbound and Yes No Maybe So

“One of the most beautiful books I’ve read in years. McLemore is a master." —Susan Dennard, New York Times–bestselling author of the Witchlands series

"The sort of book that ruins all other books for you. Lush, hypnotic, and an absolute feast for the senses . . . McLemore has once again proved themself to be one of the finest writers working today.” —Mackenzi Lee, New York Times–bestselling author of The Gentleman's Guide to Vice and Virtue