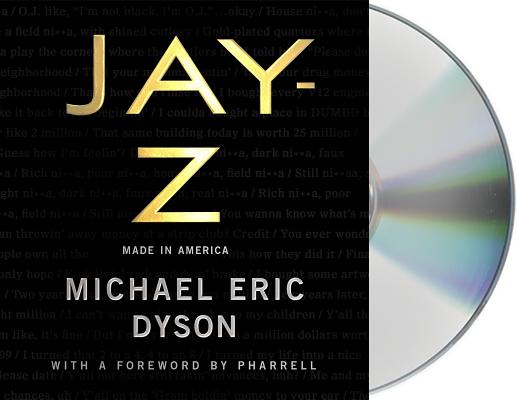 This program is read by the author, and includes an introduction written by Pharrell, and read by Nick Cannon.

This audiobook wrestles with the biggest themes of JAY-Z's career, including hustling, and it recognizes the way that he’s always weaved politics into his music, making important statements about race, criminal justice, black wealth and social injustice. As he enters his fifties, and to mark his thirty years as a recording artist, this is the perfect time to take a look at JAY-Z’s career and his role in making this nation what it is today. In many ways, this is JAY-Z’s America as much as it’s Pelosi’s America, or Trump’s America, or Martin Luther King’s America. JAY-Z has given this country a language to think with and words to live by.

Nick Cannon is a successful, multi-faceted entertainer: comedian, TV executive producer and host, filmstar/director, entrepreneur, philanthropist and children’s book author. He was cited by People Magazine as one of the “Top 10 Most Successful Young People in Hollywood.” Presently he is host of NBC’s “America’s Got Talent”. Through his highly successful multi-media company NCredible Entertainment, Cannon produces TV and film projects, including Nickelodeon’s Make It Pop (which recently got re-newed for a 2nd season), HALO Awards, and TeenNick Top 10, React To That. On the film side, Cannon made his first appearance on the big screen alongside Will Smith in Men in Black II. Other television credits include the classic feature film Drumline. He also starred as one of the lead character roles in Spike Lee’s controversial movie Chi’Raq. Noted by the New York Times as “one of the most recognizable personalities in teen media,” Cannon also actively serves as the CEO of the teen magazine Celebrity High, as well as Chairman of TeenNick, Nickelodeon’s television network aimed at the teen audience.
Loading...
or
Not Currently Available for Direct Purchase