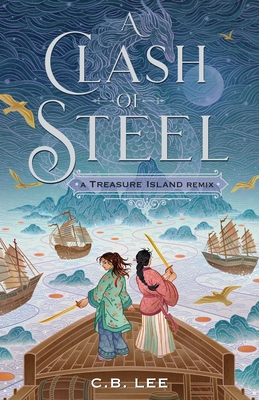 A Clash of Steel

Two intrepid girls hunt for a legendary treasure on the deadly high seas in this YA remix of the classic adventure novel Treasure Island.

1826. The sun is setting on the golden age of piracy, and the legendary Dragon Fleet, the scourge of the South China Sea, is no more. Its ruthless leader, a woman known only as the Head of the Dragon, is now only a story, like the ones Xiang has grown up with all her life. She desperately wants to prove her worth, especially to her mother, a shrewd businesswoman who never seems to have enough time for Xiang. Her father is also only a story, dead at sea before Xiang was born. Her single memento of him is a pendant she always wears, a simple but plain piece of gold jewelry.

But the pendant's true nature is revealed when a mysterious girl named Anh steals it, only to return it to Xiang in exchange for her help in decoding the tiny map scroll hidden inside. The revelation that Xiang's father sailed with the Dragon Fleet and tucked away this secret changes everything. Rumor has it that the legendary Head of the Dragon had one last treasure—the plunder of a thousand ports—that for decades has only been a myth, a fool's journey.

Xiang is convinced this map could lead to the fabled treasure. Captivated with the thrill of adventure, she joins Anh and her motley crew off in pursuit of the island. But the girls soon find that the sea—and especially those who sail it—are far more dangerous than the legends led them to believe.


Praise For A Clash of Steel: A Treasure Island Remix (Remixed Classics)…

Praise for the Sidekick Squad series:

"Lee delivers YET AGAIN with another SIDEKICK full of heart, guts, and all the queerness you could wish for." —E.K. Johnston, #1 New York Times-bestselling author, on Not Your Backup

"With realistic (and supportive!) relationships anchoring the narrative, Lee crafts a well-paced story of self discovery, brimming with effortless inclusivity and thrilling dose of heroic adventure." —Claire Kann, author of Let's Talk About Love, on Not Your Backup

"Not Your Sidekick, Not Your Villain, and Not Your Backup are entertaining and propulsive novels written with confidence, charm, and cheek. C.B. Lee gets not only how to elevate superhero tropes but how to write teenagers in an honest and compelling way. Everything from the worldbuilding to the plots to the character development are firing on all cylinders." —Alex Brown, Tor.com

"Jess and Abby are delightful characters and superhero fans like this reviewer will especially enjoy Lee's take on how superpowers work. I'm ready for the sequel!" —RT Book Reviews, on Not Your Sidekick

"Lee offers up a fast-paced, engaging tale set in a quasi-dystopian 22nd-century America where the line between hero and villain is often blurred. With a diverse cast of characters, both in terms of sexuality and ethnic background, and a wholly adorable romance for Jess, it s a lively exploration of morality in a superpowered age." —Publishers Weekly, on Not Your Sidekick

C.B. Lee (she/her) is a Lambda Literary Award nominated writer of young adult science fiction and fantasy. Her works include the Sidekick Squad series (Duet Books), Ben 10 graphic novels (Boom! Studios), and Out Now: Queer We Go Again (HarperTeen). She loves to write about queer teens, magic, superheroes, and the power of friendship. Lee’s work has been featured in Teen Vogue, Wired Magazine, Hypable, Tor’s Best of Fantasy and Sci Fi and the American Library Association’s Rainbow List.
Loading...
or support indie stores by buying on