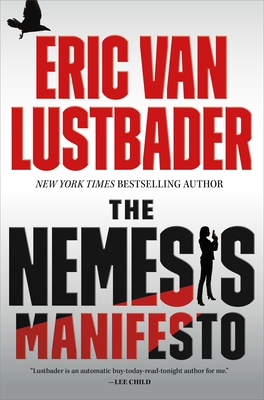 In The Nemesis Manifesto, New York Times bestselling author Eric Van Lustbader, "the master of the smart thriller,"* delivers an epic and harrowing adventure of the predatory forces that are threatening the very fabric of democracy and kicks off a compelling new series with a singular new hero for our time.

Evan Ryder is a lone wolf, a field agent for a black-ops arm of the DOD, who has survived unspeakable tragedy and dedicated her life to protecting her country. When her fellow agents begin to be systematically eliminated, Evan must unravel the thread that ties them all together...and before her name comes up on the kill list.

The list belongs to a mysterious cabal known only as Nemesis, a hostile entity hell-bent on tearing the United States apart. As Evan tracks them from Washington D.C. to the Caucasus Mountains, from Austria to a fortress in Germany where her own demons reside, she unearths a network of conspirators far more complex than anyone could have imagined. Can Evan uproot them before Nemesis forces bring democracy to its knees?


Praise For The Nemesis Manifesto: An Evan Ryder Novel…

“[An] outstanding series launch… Credible action and often lyrical prose support the complex, intelligent plot. A series of twists and an extended fight sequence at the end will leave readers amazed and pleasantly exhausted. Lustbader is at the top of his game.” —Publishers Weekly, starred review

“One of the best in the business delivers a gem of a read. This one is top notched all the way.” —Steve Berry

“Lustbader is in excellent form here. The Nemesis Manifesto is dark, sophisticated and compelling, and couldn’t be more timely. And Evan Ryder is a keeper!” —David Baldacci

“There are thrillers, then there are world-class, expertly-plotted, thought-provoking thrillers like The Nemesis Manifesto. Thriller authors are probably the hardest thriller readers to please. Consider me thoroughly blown away.” —Raymond Khoury, New York Times bestselling author of Empire of Lies

“Hypnotically suspenseful, rich with authentic spycraft, The Nemesis Manifesto by Eric Van Lustbader introduces a heroine of our times – Evan Ryder. She’s deep undercover and as complex as she is exciting. …Lustbader weaves a spellbinding web of memorable characters, cutting-edge technology, and powerful political ambitions that could become all too real. Sit back and enjoy. You’re about to read a master at the top of a very dangerous game.” —Gayle Lynds, New York Times bestselling author of The Assassins

“One of the great thriller authors.” —Joseph Finder

“Lustbader is an automatic buy-today-read-tonight author for me—and should be for you.” —Lee Child, New York Times bestselling author of 61 Hours

ERIC VAN LUSTBADER is the author of many New York Times bestselling thrillers, including The Testament, First Daughter, Last Snow, and Blood Trust. Lustbader was chosen by Robert Ludlum's estate to continue the Jason Bourne series. He and his wife live on the South Fork of Long Island.
Loading...
or support indie stores by buying on
(This book is on backorder)