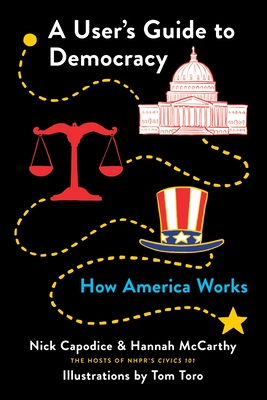 A User's Guide to Democracy

From Nick Capodice & Hannah McCarthy, the hosts of New Hampshire Public Radio’s Civics 101, and New Yorker cartoonist Tom Toro, A User's Guide to Democracy is a lively crash course in everything you should know about how the US government works.

Do you know what the Secretary of Defense does all day? Are you sure you know the difference between the House and the Senate? Have you been pretending you know what Federalism is for the last 20 years? Don’t worry--you’re not alone. The American government and its processes can be dizzyingly complex and obscure.

Within this book are the keys to knowing what you’re talking about when you argue politics with the uncle you only see at Thanksgiving. It’s the book that sits on your desk for quick reference when the nightly news boggles your mind. This approachable and informative guide gives you the lowdown on everything from the three branches of government, to what you can actually do to make your vote count, to how our founding documents affect our daily lives. Now is the time to finally understand who does what, how they do it, and the best way to get them to listen to you.


Praise For A User's Guide to Democracy: How America Works…

"An easily digestible, illustrated guidebook to the agencies and institutions that make up the federal government... Just the thing for students of civics—which, these days, should include the entire polity."
—Kirkus Reviews

Nick Capodice is the co-host of Civics 101. Before coming to NHPR, Nick worked in the Education Department at the Lower East Side Tenement Museum, where he wrote and led tours, trained educators, and helped design digital exhibits. He also led beer history and tasting tours for Urban Oyster in Brooklyn.

Hannah McCarthy is the co-host of Civics 101 from New Hampshire Public Radio. She came to New Hampshire by way of Brooklyn where she worked as a radio producer and writer. She lives in Boston, Massachusetts.

Tom Toro is a cartoonist for The New Yorker and a fiction writer. He is the author/illustrator of HOW TO POTTY TRAIN YOUR PORCUPINE (Little, Brown & Company, 2020) and TINY HANDS (Dock Street Press, 2017). Tom lives in Portland, Oregon with his wife, kid, and cat.
Loading...
or support indie stores by buying on