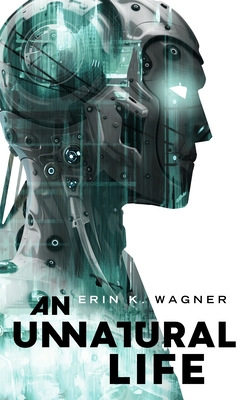 Murderbot meets To Kill a Mockingbird in Erin K. Wagner's An Unnatural Life, an interplanetary tale of identity and responsibility.

The cybernetic organism known as 812-3 is in prison, convicted of murdering a human worker but he claims that he did not do it. With the evidence stacked against him, his lawyer, Aiya Ritsehrer, must determine grounds for an appeal and uncover the true facts of the case.

But with artificial life-forms having only recently been awarded legal rights on Earth, the military complex on Europa is resistant to the implementation of these same rights on the Jovian moon.

Aiya must battle against her own prejudices and that of her new paymasters, to secure a fair trial for her charge, while navigating her own interpersonal drama, before it's too late.

Erin K. Wagner is an English professor in the SUNY system, an Appalachian transplanted to the Catskills. Her short stories have appeared in a variety of publications, including Apex and Clarkesworld, and her poetry has been published in Abyss & Apex and the South Dakota Review. Her first novella, The Green and Growing, was published by Aqueduct Press.
Loading...
or support indie stores by buying on