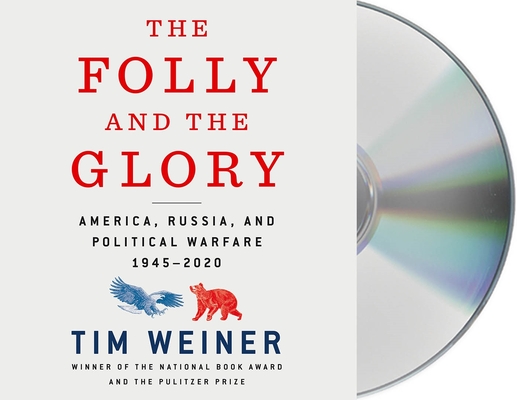 The Folly and the Glory

From Tim Weiner, winner of the Pulitzer Prize and the National Book Award, an urgent and gripping account of the 75-year battle between the US and Russia that led to the election and impeachment of an American president.

With vivid storytelling and riveting insider accounts, Weiner traces the roots of political warfare – the conflict America and Russia have waged with espionage, sabotage, diplomacy and disformation – from 1945 until 2020. America won the cold war, but Russia is winning today. Vladimir Putin helped to put his chosen candidate in the White House with a covert campaign that continues to this moment. Putin’s Russia has revived Soviet-era intelligence operations gaining ever more potent information from—and influence over—the American people and government. Yet the US has put little power into its defense. This has put American democracy in peril.

Weiner takes us behind closed doors, illuminating Russian and American intelligence operations and their consequences. To get to the heart of what is at stake and find potential solutions, he examines long-running 20th century CIA operations, the global political machinations of the Soviet KGB around the world, the erosion of American political warfare after the Cold War, and how 21st century Russia has kept the cold war alive. The Folly and the Glory is an urgent call to our leaders and citizens to understand the nature of political warfare – and to change course before it’s too late.

Tim Weiner has won the Pulitzer Prize and the National Book Award for his reporting and writing on national security and intelligence. He covered the CIA, the war in Afghanistan, and crises and conflicts in fourteen nations for The New York Times. Weiner has taught history and writing at Princeton and Columbia. The Folly and the Glory is his sixth book.

Stefan Rudnicki is an award winning audiobook narrator, director and producer. He was born in Poland and now resides in Studio City, California. He has narrated more than three hundred audiobooks and has participated in over a thousand as a writer, producer, or director. He is a recipient of multiple Audie Awards and AudioFile Earphones Awards as well as a Grammy Award, a Bram Stoker Award, and a Ray Bradbury Award. He received AudioFile’s award for 2008 Best Voice in Science Fiction and Fantasy. Along with a cast of other narrators, Rudnicki has read a number of Orson Scott Card's best-selling science fiction novels. He worked extensively with many other science fiction authors, including David Weber and Ben Bova. In reviewing the twentieth anniversary edition audiobook of Card’s Ender's Game, Publishers Weekly stated, "Rudnicki, with his lulling, sonorous voice, does a fine job articulating Ender's inner struggle between the kind, peaceful boy he wants to be and the savage, violent actions he is frequently forced to take." Rudnicki is also a stage actor and director.
Loading...
or
Not Currently Available for Direct Purchase