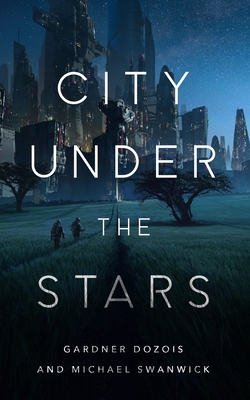 City Under the Stars (Paperback)

City Under the Stars completes a journey undertaken by Gardner Dozois and Michael Swanwick 25 years ago, when they published the novella The City of God. Over two decades later, the two realized there was more to the story, and began the work of expanding it. Now, after Gardner Dozois' tragic passing, the story can be told in full.

God was in his Heaven—which was fifteen miles away, due east.

Far in Earth's future, in a post-utopian hell-hole, Hanson works ten solid back-breaking hours a day, shoveling endless mountains of coal, within sight of the iridescent wall that separates what’s left of humanity from their gods.

One day, after a tragedy of his own making, Hanson leaves the city, not knowing what he will do, or how he will survive in the wilderness without work. He finds himself drawn to the wall, to the elusive promise of God. And when the impossible happens, he steps through, into the city beyond.

The impossible was only the beginning.

MICHAEL SWANWICK has received the Nebula, Theodore Sturgeon, World Fantasy and Hugo Awards, and has the pleasant distinction of having been nominated for and lost more of these same awards than any other writer. His novels include Stations of the Tide, Bones of the Earth, two Darger and Surplus novels, and The Iron Dragon's Mother. He has also written over a hundred and fifty short stories - including the Mongolian Wizard series on Tor.com - and countless works of flash fiction. He lives in Philadelphia with his wife, Marianne Porter.
or support indie stores by buying on
Copyright © 2020 American Booksellers Association