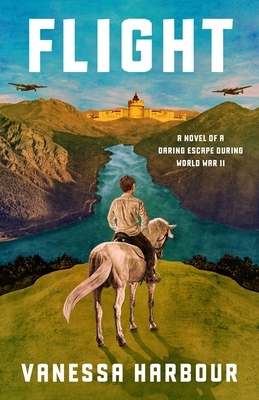 A Novel of a Daring Escape During World War II

From Vanessa Harbour comes Flight, a middle-grade historical fiction novel about a Jewish boy and a Roma girl leading a group of horses across mountains to escape Nazis during WWII.

Everyone deserves to be free and feel safe, even horses.

The year is 1945 in Austria, where an SS officer and some of his men visit a stable, determined to find the Jewish boy they believe the owner is hiding there. Luckily, just as Jakob—the boy in question—is about to be found, the men are called away…but not before the SS officer shoots and kills Jakob’s favorite horse. It’s very clear then, to Jakob and his guardian, that they are no longer safe there. Traveling through Nazi territory with that many horses will be incredibly difficult and risky, but the alternative—staying—is even more dangerous.

After an orphaned Roma girl named Kizzy joins the pair, the three of them travel across woods and mountains in the hopes of finding safety. Along the way are life-threatening obstacles and an injury that could prove to be deadly.

Inspired by a real mission, this is a story of courage, adventure, friendship, and dancing horses.

Vanessa Harbour was born in Bromsgrove. She is Senior Lecturer in Creative Writing at the university in Winchester. She used to run her own PR consultancy. She has been commissioned to write Creative and Critical Approaches to Writing Young Adult Fiction by Palgrave. She is Academic and Business Consultant at the Golden Egg Academy and works for them as an editor. Flight is her first novel.
Loading...
or support indie stores by buying on