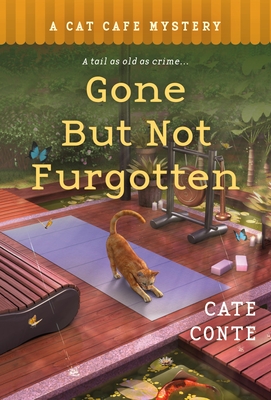 In Gone but Not Furgotten, the sixth in Cate Conte's Cat Café beloved cozy mystery series, Daybreak Island has a killer on the loose…and this villain isn’t afraid to use their claws.

Maddie James has big plans for the summer season at JJ's House of Purrs. But when her friend, master meditator and Tai Chi teacher Cass Hendricks, brings a potential animal hoarding situation to her attention, Maddie has to refocus her attention on the furry felines who may need a helping paw.

Cass has brought his Zen teachings to Fisherman's Cove—a tiny, working class town on Daybreak Island—and one of his students, Laurel, has been on the receiving end more than one hissy fit from her neighbors, mostly because of her cats. When Maddie and Cass go to Laurel's to check out the situation, not only do they find a plethora of cats in need, but also a dead body. Laurel appears to have had an unfortunate accident falling down her stairs, but Maddie gets a sneaking suspicion that something more sinister might be behind her death. When she voices her concerns, she's horrified that it's Cass who falls under suspicion.

With Grandpa Leo's help, Maddie has to dig into the secrets this small community is keeping close to find out why Laurel really died before Cass is put behind bars . . . or the killer strikes again.

Cate Conte writes the Cat Cafe Mysteries and the new Full Moon Mysteries. As Liz Mugavero, she writes the Pawsitively Organic Mysteries, the first of which was an Agatha Award nominee for Best First Novel. She lives in Connecticut with her rescue pals.
Loading...
or support indie stores by buying on