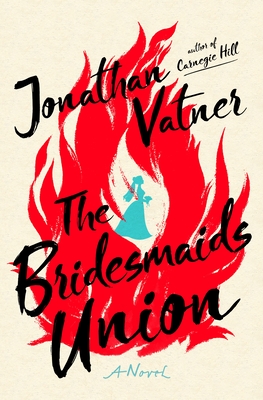 From the author of Carnegie Hill, comes Jonathan Vatner's The Bridesmaids Union, a captivating novel of family, Facebook groups, and bridesmaids gone rogue.

Iris Hagarty has just about had it with weddings. After witnessing one too many meltdowns over flower arrangements, she takes to the internet to vent about the trials and tribulations of being a bridesmaid to demanding and ungrateful brides. She finds she is not alone, and soon becomes the moderator of a Facebook group full of other bridesmaids, eager to share their own horror stories.

Enter Iris’s sister Jasmine, the golden child and their parents’ obvious favorite, newly engaged and wanting none other than Iris to be her maid of honor. Knowing full well that Jasmine doesn’t need a wedding to bring out her spoiled side, Iris buckles in for a bumpy ride. At least now she has an outlet—one full of new online friends hungry for juicy details.

But as the Bridesmaids Union grows, Iris finds it harder to keep under control. And she even has some doubts about whether there will be a wedding after all. While Jasmine’s fiancé, David, seems smitten with his bride-to-be, Iris is less sure about her social-climber sister’s intentions. Though that could just be because Iris is having trouble keeping her own eyes off of the groom.

Brimming with family drama, and set in the ever-encroaching world of Instagram DM's and Facebook flame wars, The Bridesmaids Union shows the power and limits of alliances we form on social media, and how to make the most of the ones we’re born into.


Praise For The Bridesmaids Union: A Novel…

"Sharply satiric....Vatner digs beneath the story’s shiny rom-com surface to unearth some hard truths about weddings and family ties....Reading this spiky tale is like catching a beautiful bridal bouquet with thorns."
—Publishers Weekly

"Sitting in the sun in between travel days with a glass of lemonade (or maybe a martini) with this book is an excellent escape." —She Reads

"[A] charming, comically observant debut… it’s [Vatner’s] consistently wry wit and obvious affection for his deluded, struggling characters that are this novel's propelling forces, and which will win readers over with delight." —Booklist (starred review)

"Vatner’s keen eye for domestic dissatisfaction will remind readers of Laurie Colwin. He populates the Chelmsford Arms with a delightful cast of characters, but best of all is Pepper herself, a charming, contemporary update of an Edith Wharton character. This debut will entertain and satisfy readers." —Publishers Weekly

JONATHAN VATNER is an award-winning journalist who has written for The New York Times; O, The Oprah Magazine; Poets & Writers; and many other publications. He has an MFA in creative writing from Sarah Lawrence College and a BA in cognitive neuroscience from Harvard University. He lives in Yonkers, NY with his husband and cats. Carnegie Hill is his first novel.
Loading...
or support indie stores by buying on